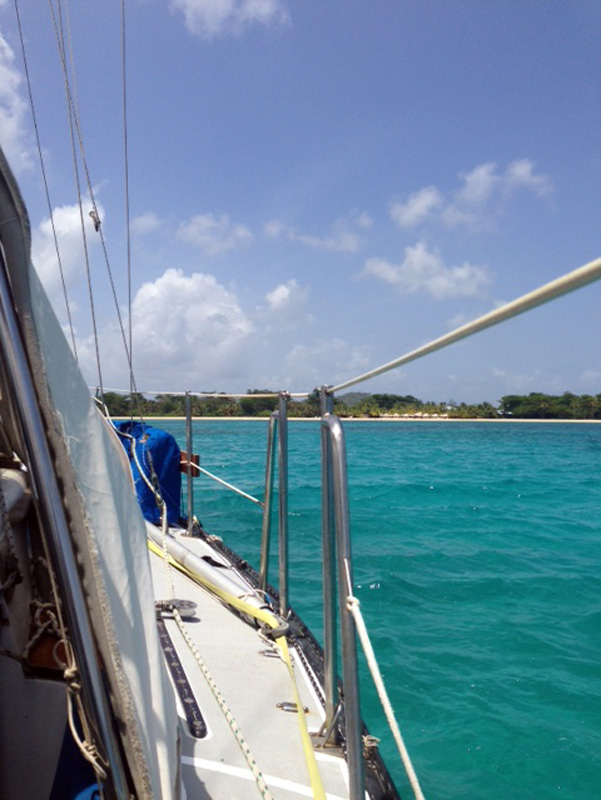 We didn’t really know what to expect from a place called “Big Corn Island” — the reactions of folks in Panama to our next planned destination were pretty varied (“where?”, “why??”, “is it safe there?”, and my personal favourite, “good luck!” <– what is that supposed to mean?!?)… but boy oh boy have we been pleasantly surprised 🙂

It was 2 nights to get here, and the second half was pretty rolly… but as soon as we tucked in behind the lee of Big Corn, everything smoothed out and I could see the bottom in 50 FEET of water! Kind of scary actually 😉 But also very cool! 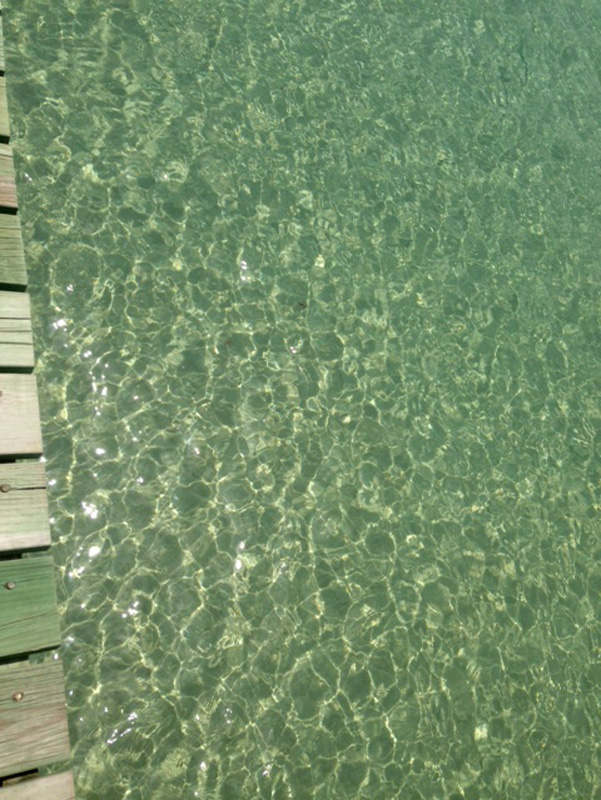 We dropped the anchor in 19′ of water. Within 25 minutes, the Port Captain was zipping out in his panga and doing circles around us. I tried to put out fenders to welcome him aboard (we weren’t really clear on if this was an official port of entry or not — the Raynes guide said it wasn’t, random blog searching said it might be, and the truth is that it is an official port of entry to Nicaragua), but he didn’t want to come aboard — he just wanted us to move in closer to his dock so we would be more protected from swell.

“2 metros! Hay 2 metros de fondo!”, he assured us… but the idea of anchoring in 6′ when we draw 5′ was not so pleasant! We compromised by anchoring in 12′ (sorry dad — I know this breaks the 4-fathom rule but I also didn’t want to fight the Port Captain!!). 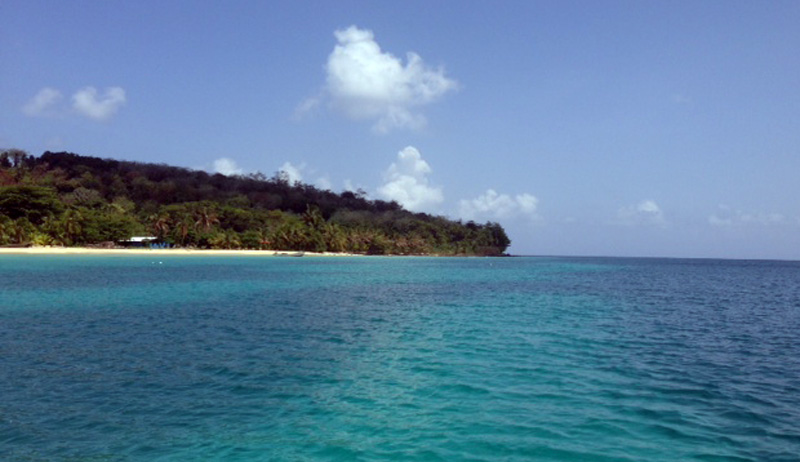 This at least meant that Jon got to cross 2 bucket-list items off:

Does this make us newbs? Maybe — but excited newbs nonetheless!! Anyways, I’m getting distracted. I’m trying to tell you about how wonderful Big Corn Island is 😉

Having assured that we were anchored in a more comfortable place, the Port Captain took us ashore in his genormous panga to do our paperwork. He had already called Immigration, so they were waiting for us in his office, and the Transit Authority, who was also waiting, so we didn’t have to wait for anyone. Not only that, but the friendly man from Immigration personally escorted us to every office we needed to visit, including the bank! Here’s the breakdown of fees we paid: 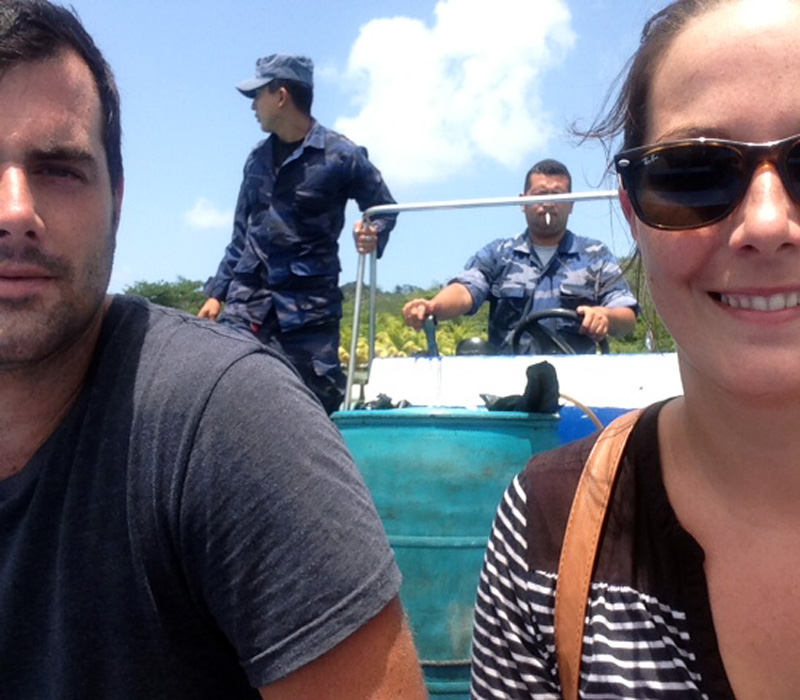 After checking in and connecting with Maureen (my great friend who has awesomely come to sail with us for the next couple weeks!), we found ice cream and groceries and were ready to cab back to the dinghy (which the Port Captain had generously allowed us to tie up at his dock, where his guys were carefully watching both the dinghy and Brio for us). With great luck, we found the taxi man Ricky. 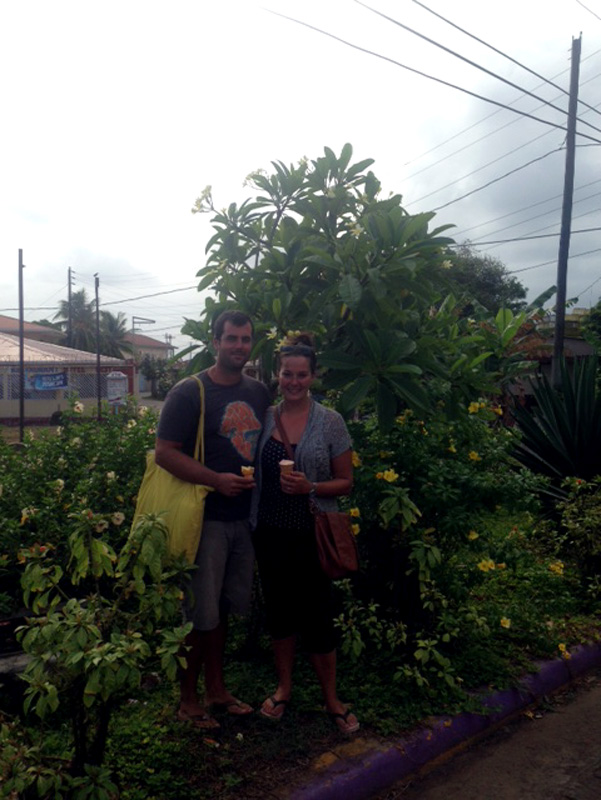 A picture with our ice creams — the bonus of having a third person for a change!

Ricky had one other passenger in his cab, so we started with a detour to the other side of the island. When Ricky found out we hadn’t toured the island, he offered to give us a tour. 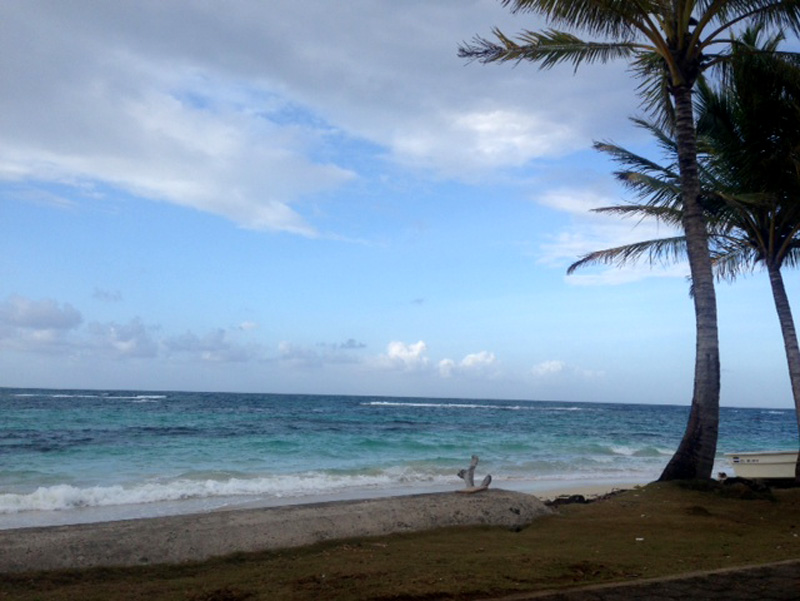 “How much would that be?” Maureen asked.

“I don’t rip you off, baby, only $10 and I give you a full tour of da island,” Ricky replied in his smooth rolling Creole.

“Hmm, we want to be back to the boat by dark so we only have an hour,” I piped in.

Without skipping a beat, Ricky shouted “Oh, okay, then I can rush it!” 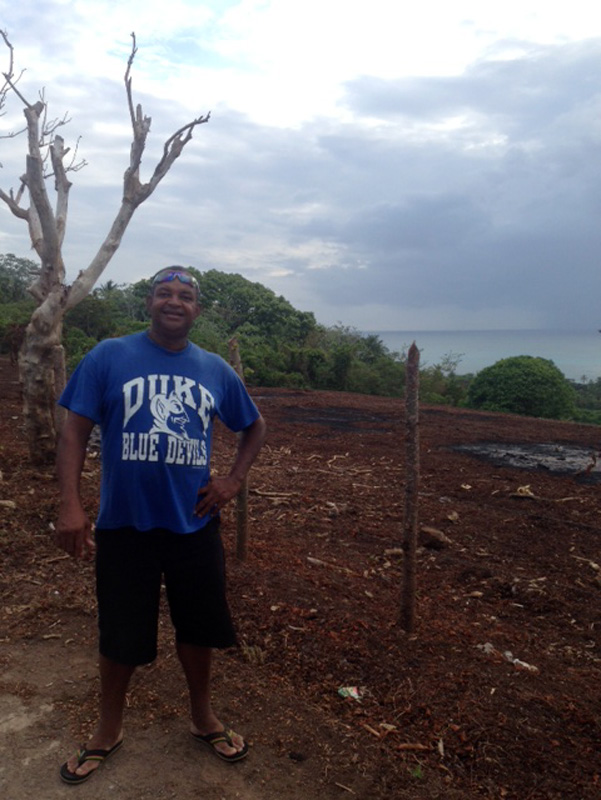 And true to his word, Ricky gave us the best rushed full tour for $10 I’ve ever had.

And while he drove us around, he kept us entertained. “You know how I look so young? My sweetheart is 19. And our baby is 7 months old. I fired my ex-wife so life here is easy.” 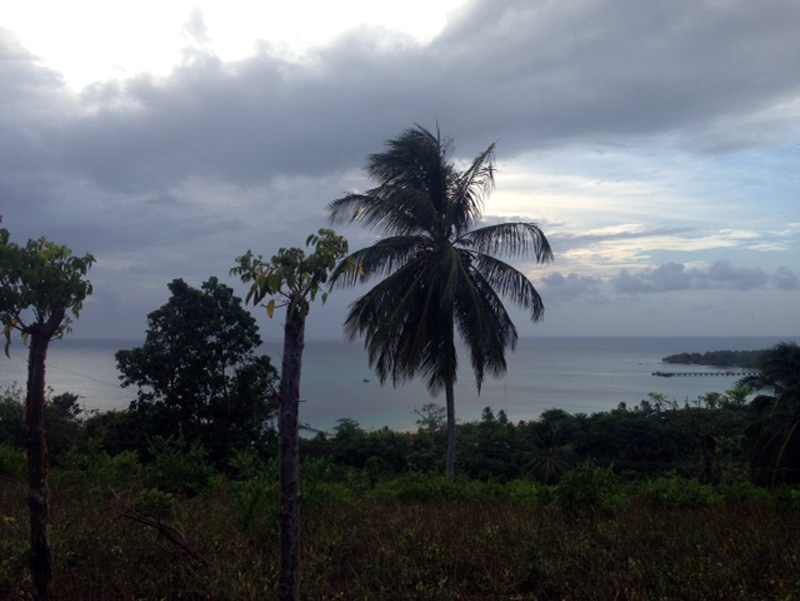 Brio is down there!

When he found out that we were on a sailboat, he excitedly exclaimed “oh, the sailboat in the bay! I saw that yesterday. The last sailboat we had was more than a month ago”.

As we explained that we had sails and an engine, his smile really grew. “Oh shit man, you’ve got it made! The freedom of the seas, a map, a GPS, you can go anywhere!”.