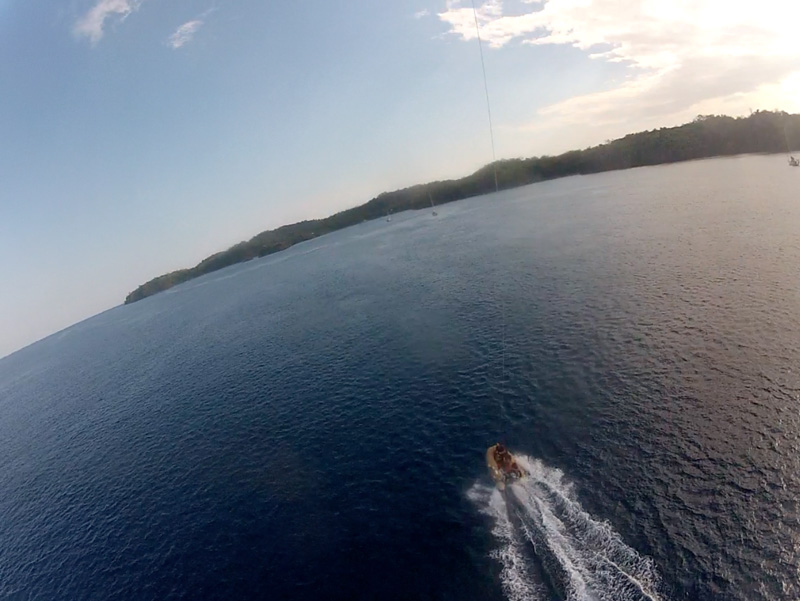 One of our first kite-flying attempts (from the dinghy!)

Jon and I have been talking about flying the GoPro off the boat ever since we got the darn thing. Actually, I think that’s why we wanted it in the first place — to fly it from a kite, and get some unique footage of Brio under sail.

We saw a few people’s aerial footage, but one guy inspired us the most. We met Christian — and his boat “Altair” — in a small anchorage in Baja California. Eventually we got around to talking cameras, and he showed us some of the videos he’d created. If you want to watch some INCREDIBLE GoPro sailing footage, go check out one of Christian’s videos. This guy is legit.

Anyways, dream firmly implanted, we set about the practical reality of actually getting a camera in the air. And while it’s not that hard, there’s a serious muddle of information and options out there (Kite Aerial Photographers — KAP’ers — are a pretty serious bunch), especially when you add in the complication of flying a camera-kite from a sailboat!

So without any further ado, I give you exactly how *we* setup our KAP rig.

Boiled down, you only need 3 things: A camera, a kite, and a picavet (or some way of self-levelling the camera while it’s up in the air).

1. Camera — GoPro with its waterproof housing.

GoPro because we already had one, and waterproof housing because we have dropped this sucker in the water a LOT.

Case in point: our very first aerial video ends with the kite spiraling out of control towards the ocean, crashing into the water, sinking quickly *glug*glug*glug* and then *CRASH* hitting the bottom. It’s a classic really, but only because we retrieved the kite and camera unscathed. 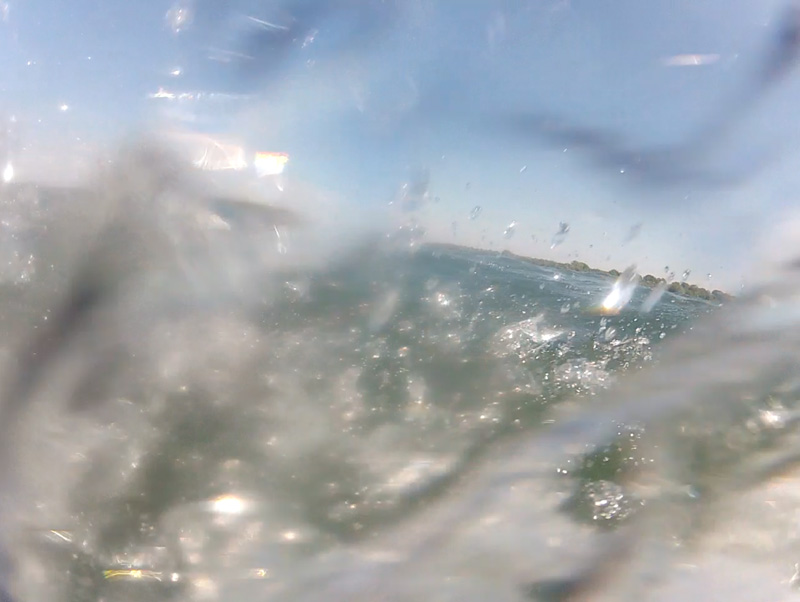 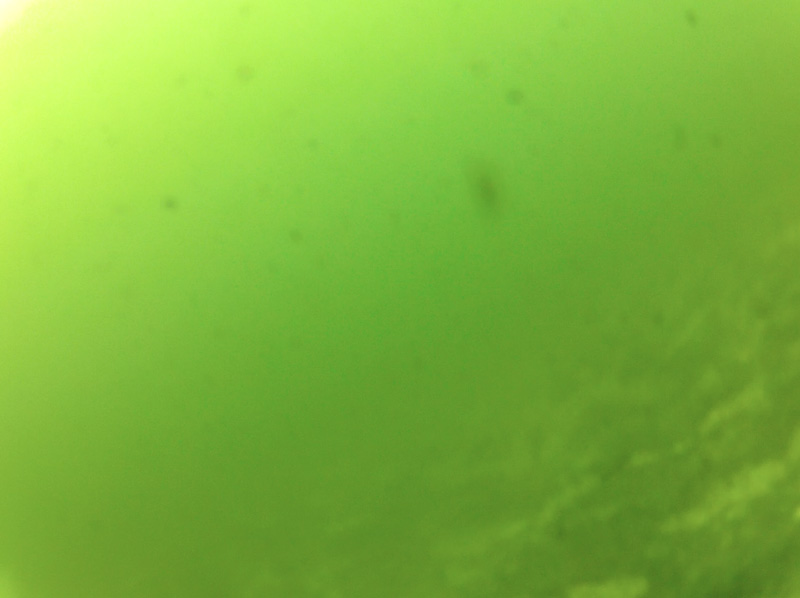 For some reason I had the hardest time figuring out which kite to buy. In the end I took the easy route and emailed Christian to ask him which kite he was using. Power Sled 14 was his reply, so Power Sled 14 was what we bought. It was listed on Amazon when I was looking, but seems to not be in stock right now. A quick Google search found a few of these on eBay though, and you at least get the idea of what you want in a kite! 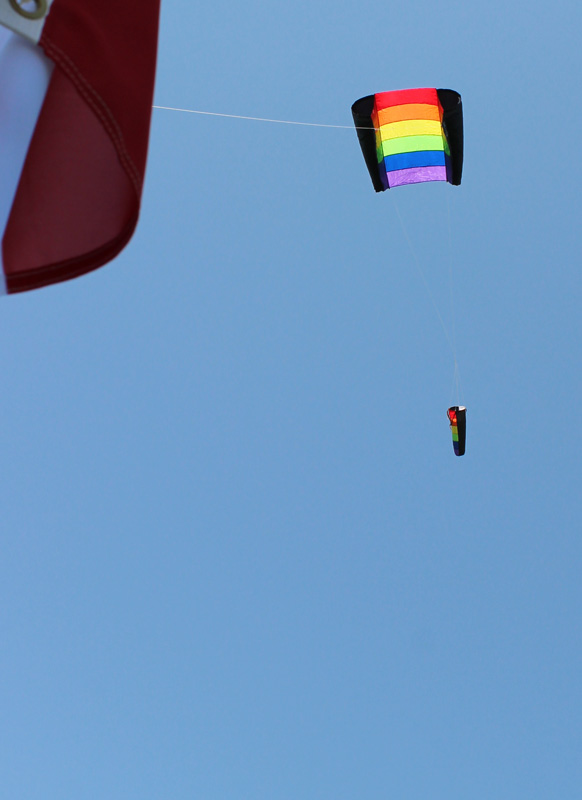 One note on kites — a bigger kite would fly in less air, but might not handle sailing weather all that well. That said, our rig is pretty heavy so this kite is *just* big enough to fly the darn thing when we’re sailing.

Finally I get to talk about picavets. Really I just like saying the word 😉 A picavet is the fancy name for ‘a thing that keeps the camera level while it’s bouncing around on the end of your kite’. This is what ours looks like… 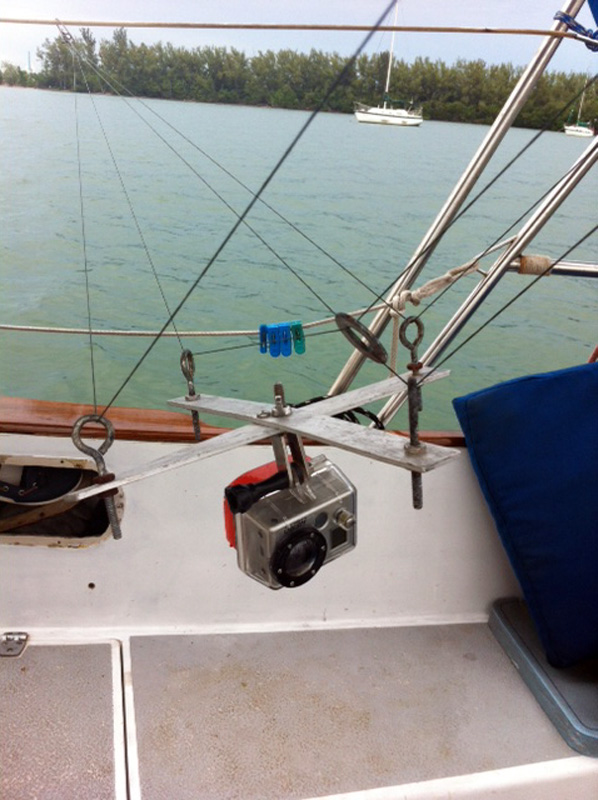 As you can see, our home-made picavet is primarily made of two pieces of flat-stock aluminum… that’s because that’s what I could find when I was trying to put this together for Jon (can you say ‘Christmas present’??).

In hindsight, all that metal is quite heavy, and not necessary. Christian’s picavet was made from two pieces of plastic batten — which would be much lighter. If we had a spare batten, I’d switch ours out right now. Alas, our battens are all in use, so we’re stuck with our slightly overweight picavet 😉

The GoPro itself is attached with a silly little piece of machining that we had made in Mexico (where machine shops are plentiful!). That said, if you’ve just bought a GoPro remember this key piece of advice: KEEP THE MOUNT IT COMES ON.

GoPro’s come in these schmancy little boxes, and they’re sitting on a perfect mount when you get them. You can literally bolt that plastic right on to your picavet, so don’t throw it out! Here’s a picture of what I’m talking about: 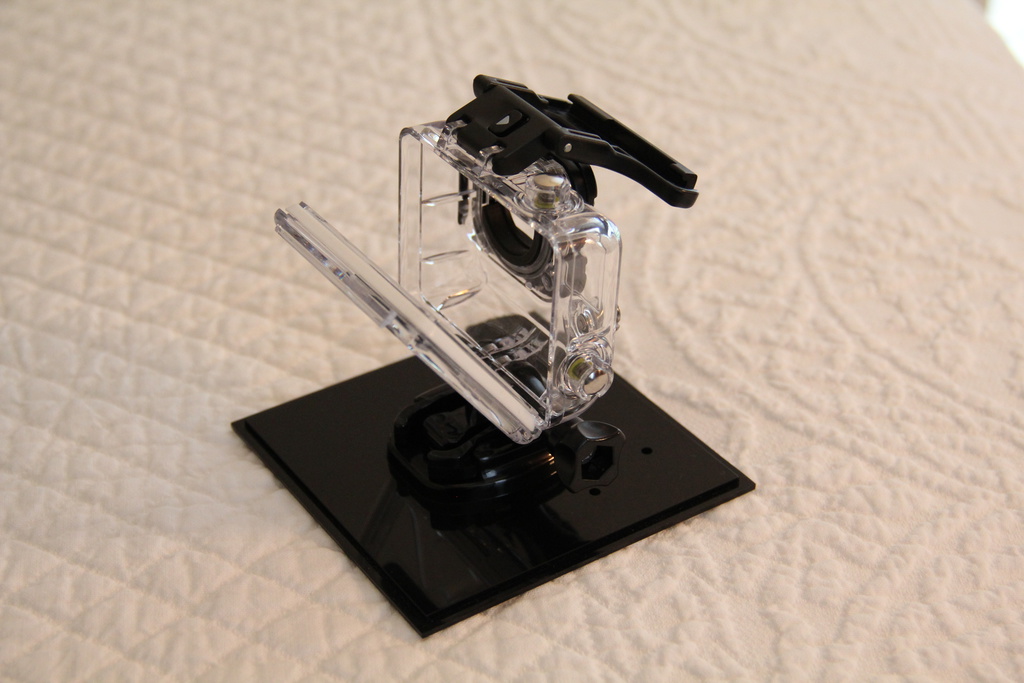 Okay, now that you’ve got your cross-members and your GoPro attached (oh and 4 of those loopy attachment things on the ends of the cross-member — I’m sure there’s a technical name for those, but I don’t know it!), it’s time to do some stringing. We used 24′ of fishing line — you can use anything similar. 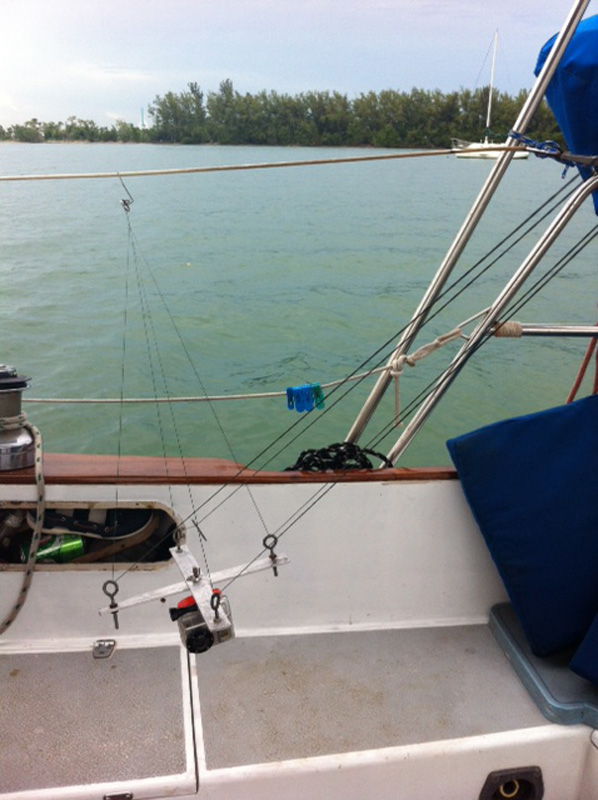 The lines run through the 4 loopy attachment points on the picavet, through a ring in the middle and up to 2 rings on the ends. I’m not even going to try to explain how to do this, I’m just going to link to an excellent little animation: 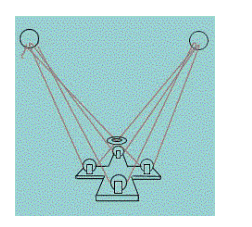 Scroll down to read “Step 2: How to string your picavet”

Phewf, you still with me??

Okay, just one more step in the picavet adventures… you need a way to actually attach the two picavet rings to the kite. In my online forum-searching, I came across a guy who said he made his attachment points out of an old coat-hanger. I thought that seemed a little crazy (and way too… basic??) but I decided to give it a try. This is what our attachment points look like (note that one end goes through the ring (which I’m holding) and the other end is for the kite). 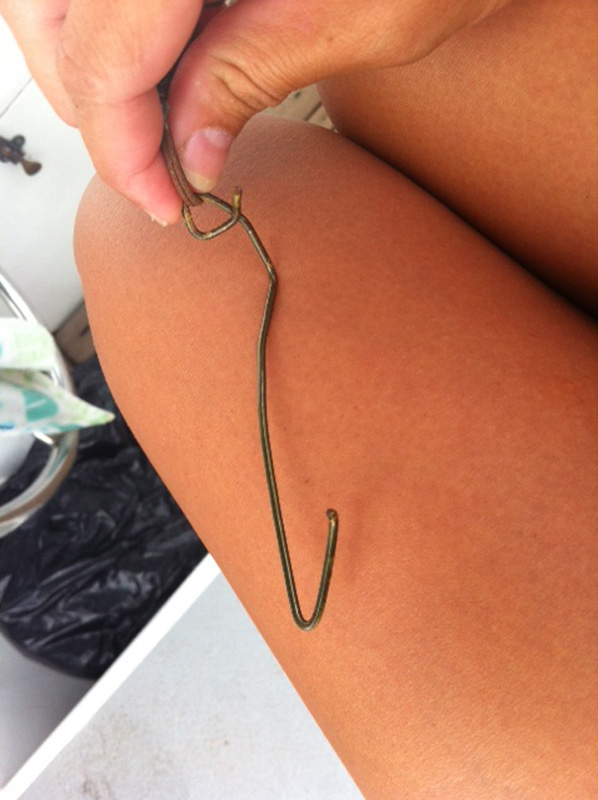 And amazingly enough, that holds! With the extra bonus of being super quick to deploy & take in. Important points when you’re trying to capture that perfect sailing afternoon!!

I know I said you only need 3 things to successfully fly your camera… but I have a few random tips to pass on (all learned the hard way!!!) 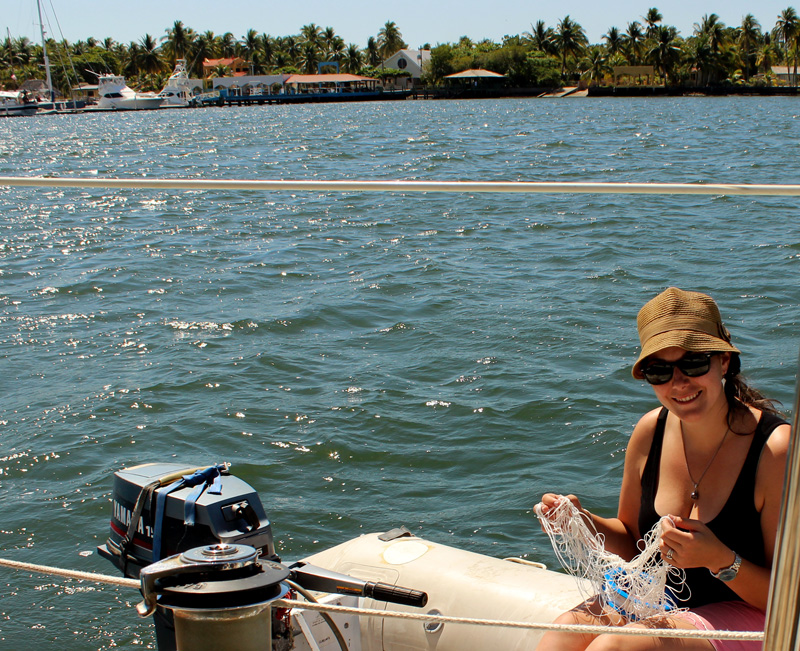 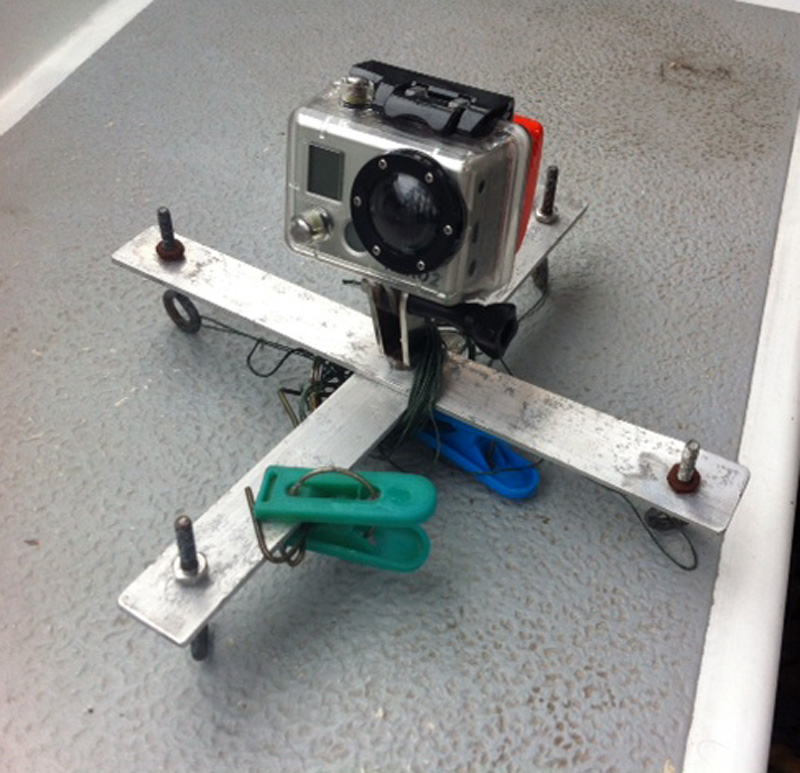 And I think that’s (finally) it! If you have any advice or tips, please pass it on — and if I missed something, let me know! Flying a kite camera is a lot of fun 🙂