There are so many things we’ve learned and lessons we’ve lived through in this whole prop / engine mount / engine aligning / stern tube / stuffing box / dripless saga, that I don’t even know where to start. Even the cliff-notes version ends up being a chapter book. Suffice to start with, “aligning a sailboat engine is a task that appears simple on the outside, but actually has tentacles into many, many, many other aspects of the entire propulsion system”. And, “don’t trust the prop experts”.

Let’s start at the beginning. Aligning an engine.

In theory, you’re trying to get the shaft coupler to perfectly match up with the transmission on the back of the engine. In our case, this means you’re laying upside down underneath the cockpit floor, with your feet approximately 8″ above your head, absolutely zero wiggle room, and three mounts that you get to move up and down and up and down and up and down in a desperate attempt to get your engine ‘aligned’.

If you’re me, this also means learning (the hard way) that “aligning an engine” is not just about getting these things parallel to one another. Being in line is EQUALLY (if not more) important. Cue toast example of engine alignment: 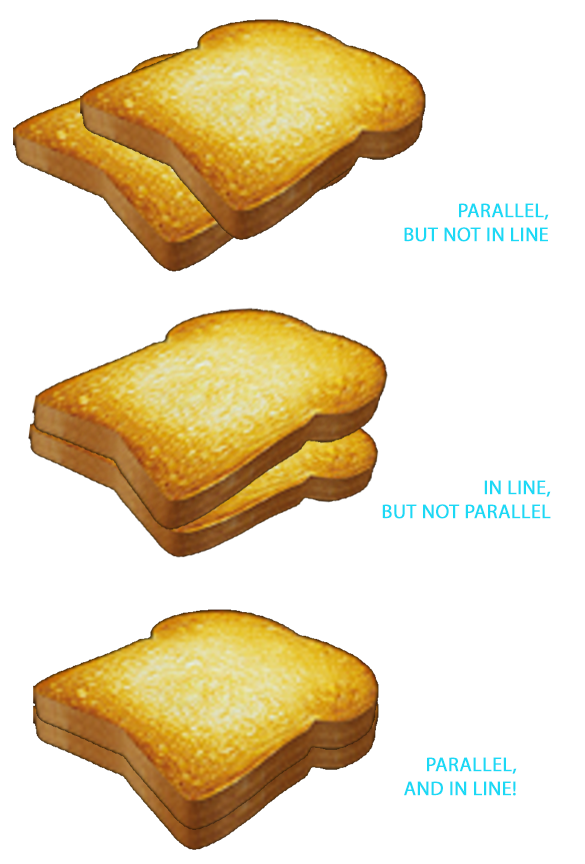 The toast examples are how I personally killed our first set of engine mounts. Turns out that if you get things perfectly parallel, but not at all lined up, your rubber mounts just disintegrate. And you’re left trying to source new engine mounts, again, in Mexico, again, which really means relying on seriously generous friends to pack engine mounts into their carry-on for you, again! Fun, I tell ya 🙂

Anyways, after we got the second set of mounts and the second round of engine aligning done (on our honeymoon – spring of 2013), the propulsion system was pretty happy. We were never fast (3.8 knots seems to be our most common motoring speed), but we were happy.

Until last summer. When we sucked some seaweed into our prop, overheated our stern tube to the point of a mini-fire, and ended up doing a surprise refit in Rockland. Surprise!

This was also when we decided, “screw it! if we’re doing a refit, let’s DO A REFIT!” We started with a new “Lasdrop” shaft seal (to replace the stuffing box that had completely seized when the whole setup overheated), and we decided to upgrade with a new prop shaft, new prop coupler, and new prop. We gave AccuTech the marine propeller company, our old prop, old shaft, and old coupler, and they sold us new gear. We installed it all, and it looked great: 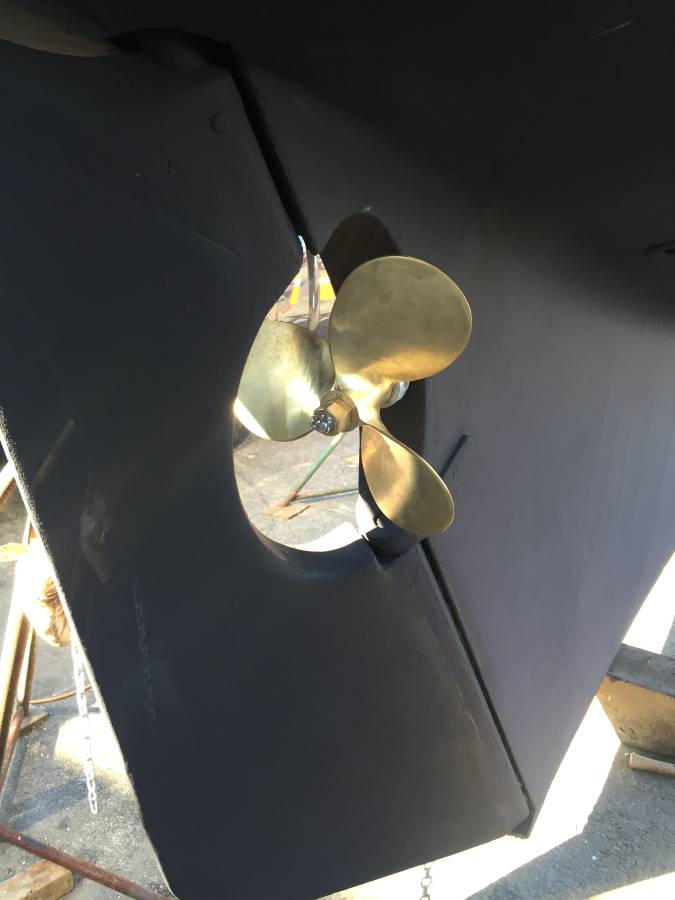 It was big! It was shiny! It was so much better suited to our boat! It was going to make us so much faster!

It hit the boat.

Literally, in forward gear at any moderate amount of RPMs, the prop would hit the aperture.

(Side note: Don’t even get me started… Yes, in hindsight it’s obvious that it’s too big, and yes, maybe we the non-prop-experts should have known that this prop was too big… but we didn’t spec this prop. We just followed AccuTech’s advice, bought the prop and shaft and coupler that they recommended, and installed the damn thing. Do you think they offered any sympathy when we called to complain about this absolutely not right prop setup they’d sold us? Nope. Instead they got downright cranky and we completely gave up trying to reason with them. I always love when emails end with, “our lawyers will be in touch” — it strikes such a confident, classy note).

This whole prop saga ended our cruising season last summer. We plunked Brio into her winter slip, hunkered down for our first winter in Maine, and pondered what to do about our brand new prop. AccuTech’s suggestion had been to install a shaft saver, to push the prop an inch further back. We tried numerous shaft savers (bright orange donut-looking things that somehow all range from $250-$350), but none gave us enough clearance off the aperture without also exposing a lot of unsupported shaft.

What all this installing and un-installing of drive savers DID reveal to us though, was that our stern tube had been slowly but surely getting worn away by our prop shaft. Yep, you heard me, we had another propulsion-related problem. This is a horrible picture, but if you’ve been staring at your stern tube lately you might appreciate it: 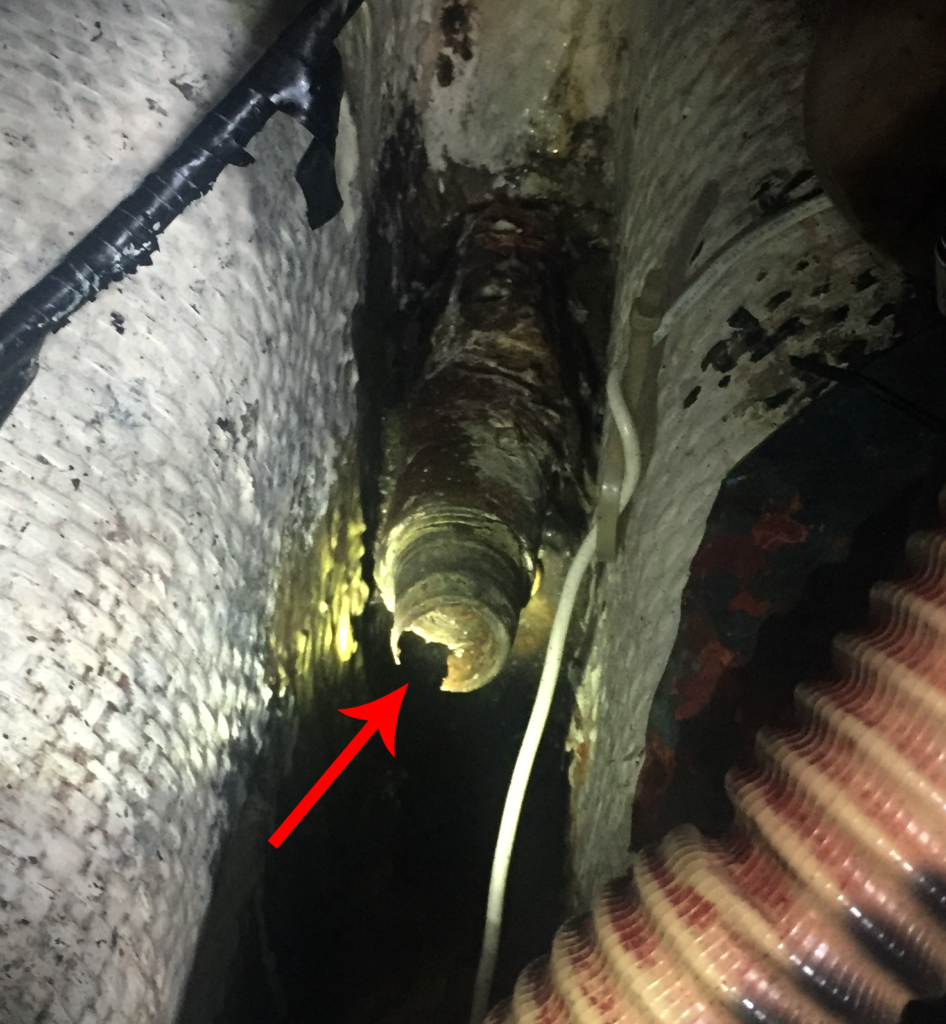 The arrow is pointing to what used to be our stern tube. The Lasdrop shaft seal is supposed to slide over that and be tensioned with a couple of hose clamps, but we were having a heck of a time getting it tight enough to not leak. NO WONDER!!

(Side note: If you’re not a boater but you’ve somehow found yourself lost in the depths of the internet reading about our stern tube, a) I’m sorry for you, and b) you should know that this tube thing we’re pointing at leads directly to the ocean, so the shaft seal is literally the only thing that is stopping the boat from sinking. Except in our case, where the shaft seal actually wasn’t stopping our boat from sinking, so we were sinking. At the dock. Very laissez-faire-like.)

So here we were again, early-August in Maine, faced with a prop that was too big and a stern tube that wasn’t there at all. What to do? Did we ignore the problem, hope the bilge pump would run and the prop would eventually wear itself down to a reasonable size? Decide to just spend our summer at the dock and deal with it all next summer? Or bite the bullet and swallow the irony and go for another August haul-out, hoping to maybe save some small part of the sailing season… 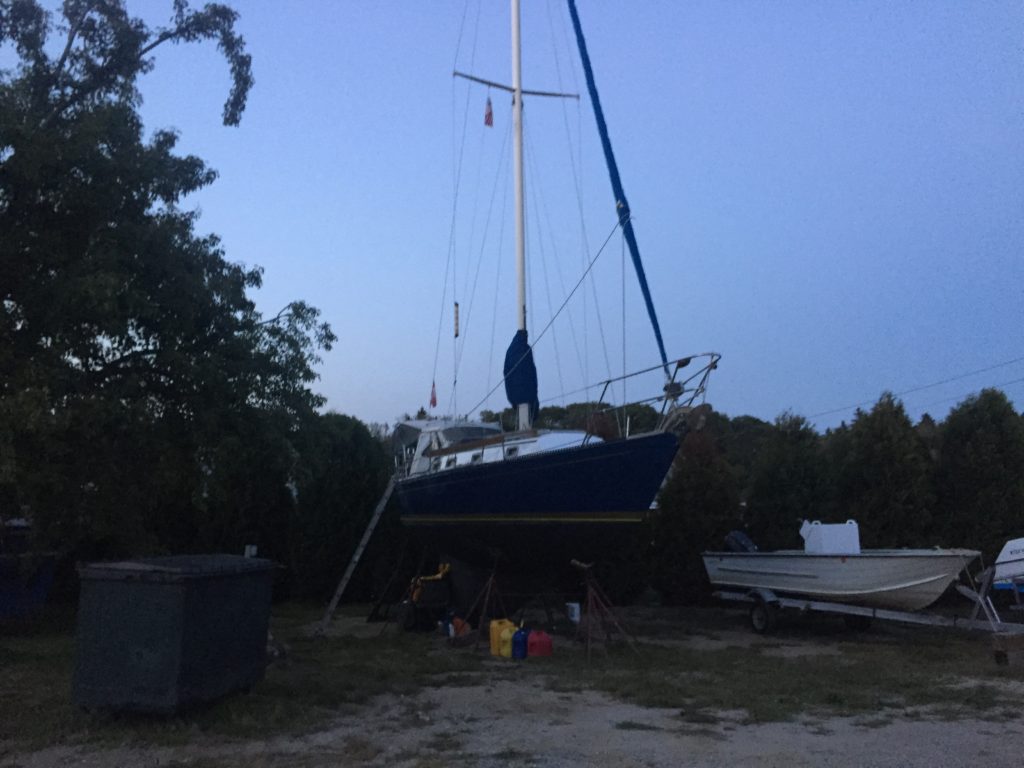 I guess you already know which answer we picked 🙂

But don’t worry, the story doesn’t end there! See, to get any kind of access to the stern tube (other than the upside-down access previously mentioned), we realized we were going to have to remove our engine. In land-life, this is kind of like deciding you might have to remove your roof*. But, you know, just temporarily while you get access to the parts you’re really working on.

So we took the engine out.

(*This was actually not the horrible experience I’d feared it might be. With a giant beam and a chain-fall, we took the engine out and put it back in a total of three round trips on this haulout alone, and I wouldn’t hesitate to do it again, if needed) 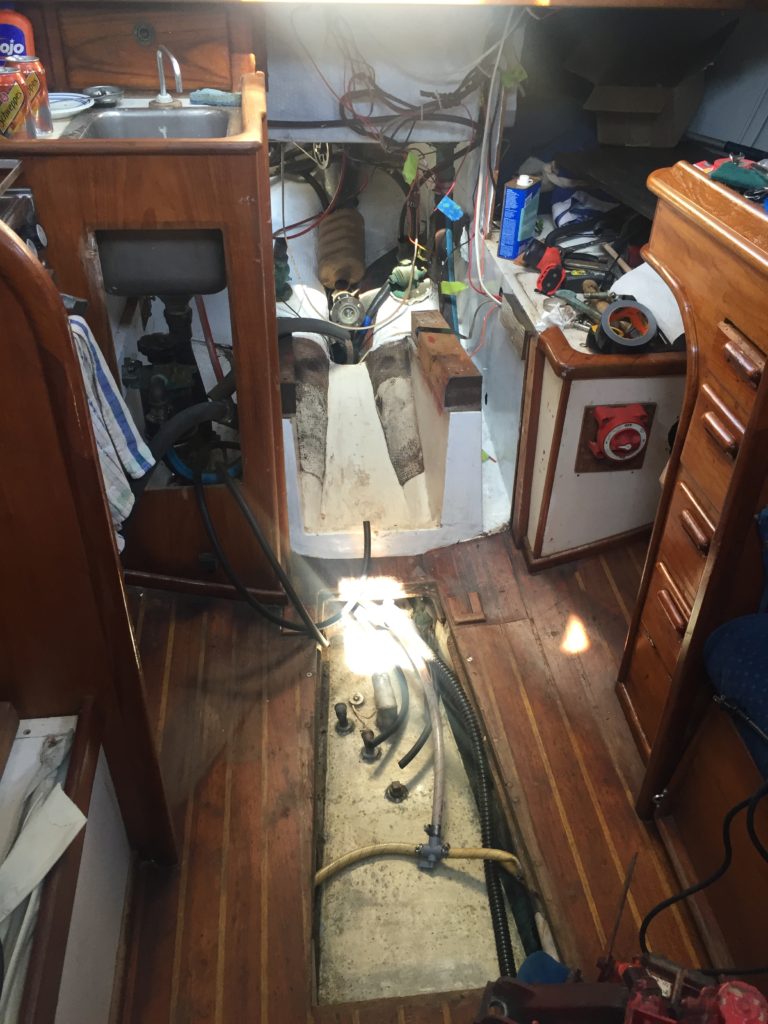 With the engine out, we had EXCELLENT access to the stern tube. We were able to cut back that flimsy bit of stern tube (to get to the nice solid bit), order a larger Lasdrop to fit that size of stern tube (cuz nothing fixes boat problems like cold, hard, cash) and get the engine back in and on new mounts.

While I still don’t really know how to align an engine, I definitely know multiple ways not to.

We put the engine back in, and started the three-mount game. Up on one, down on the other. Down in the front, up in the back. Toast?

When push came to shove, we realized that we just weren’t getting it. No matter what, we were out by about 1/8″, and in feeler gauge world? That’s too much. I fought it, Jon insisted, and in the end we accepted that it just wasn’t good enough and we needed to find a way to shift the whole engine to port just a smidge. 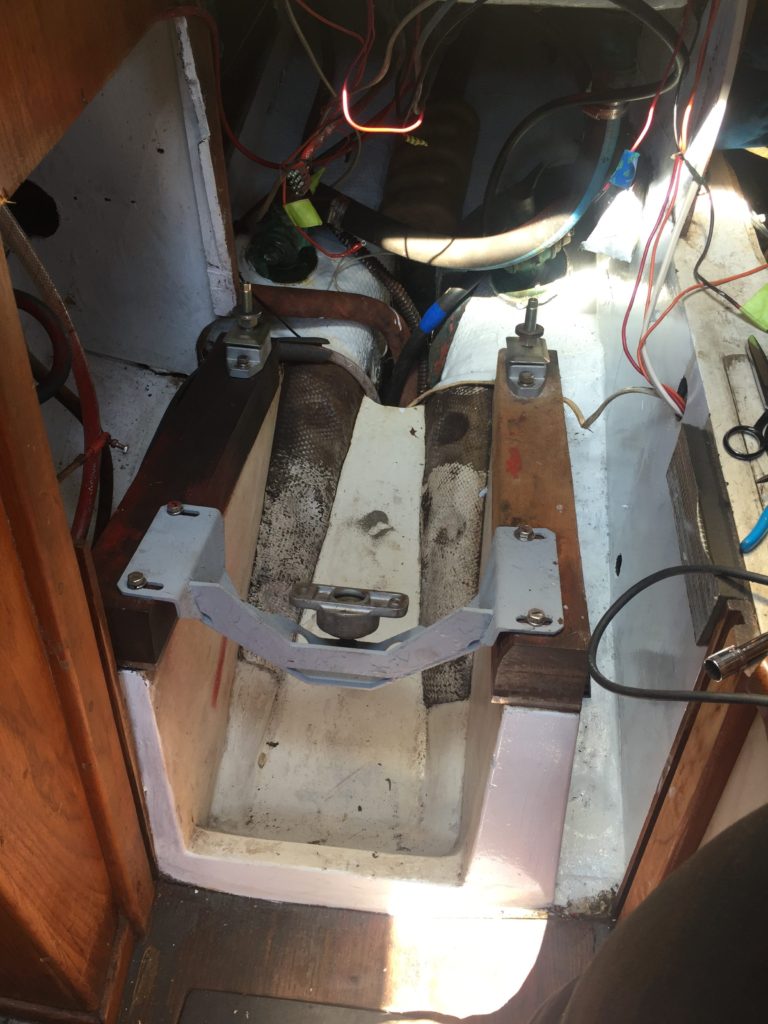 So we bit the bullet, took the engine out again, scratched our heads for a while, realized that the engine mount HOLES needed to be shifted over about 1/4″ to give us any kind of wiggle room, cut a chunk out of one of the engine stringers (hard block of wood) to give us more clearance off the engine block, filled the old stringer holes with epoxy and wood, drilled new holes, re-mounted the engine mounts (shifted to port 1/4″), and RE-ALIGNED THE DAMN ENGINE AGAIN.

It was toast, ten out of ten.

Just to keep life interesting, we also used this haul-out to remove and clean our stove (omg we should do that more often), remove and clean our aluminum fuel tank (omg it had a hole in it), remove our table (omg we may be taking this minimalist thing a little too far, but we no longer have a table), scrape-sand-paint the bottom (omg we’ve owned the boat long enough that Jon had to sand down the bottom again), replace all of our fuel lines and fittings, replace our engine starter approximately 2 hours before they launched us, and, oh yes, install a new prop. 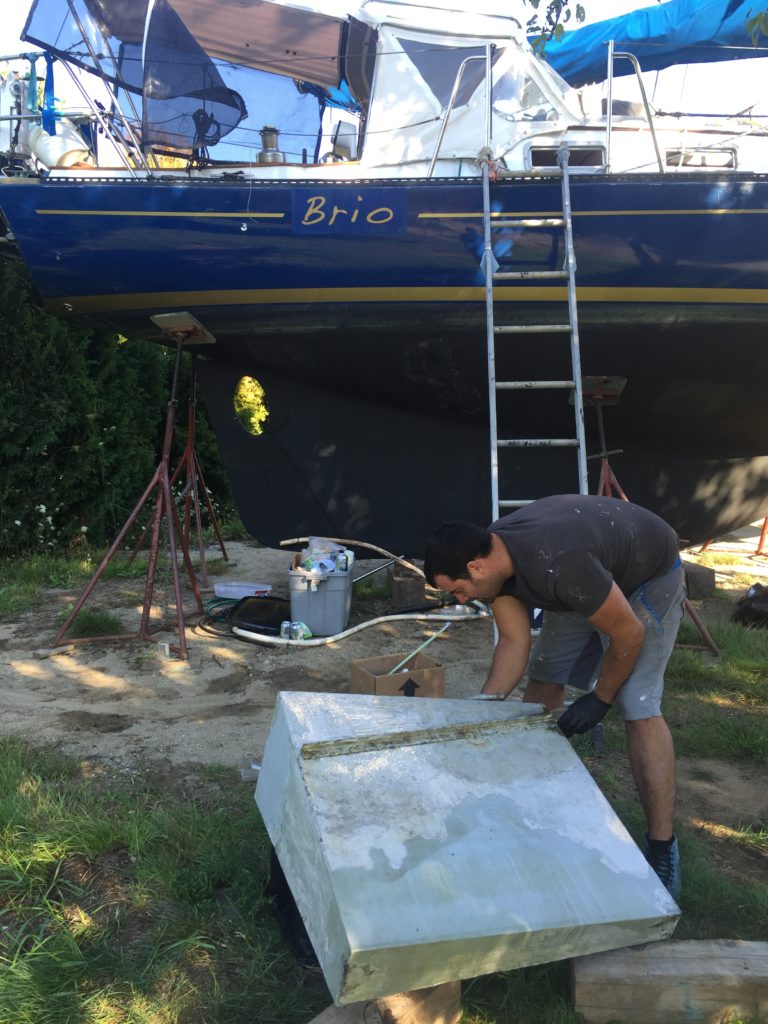 O-M-G, we literally bought another new prop. NOT from AccuTech this time 😛

This time we bought a Campbell Sailer’s Prop, from the company in BC, and so far — we LOVE it. To be fair, we never really got to see what the other prop could do for us propulsion-wise (since it obviously couldn’t get up to full RPMs), but the Campbell Sailer’s Prop absolutely gives us better propulsion, has less drag sailing, and seems to give us good maneuverability in the marina (you know that’s important to me — gotta focus to hit those pilings!). 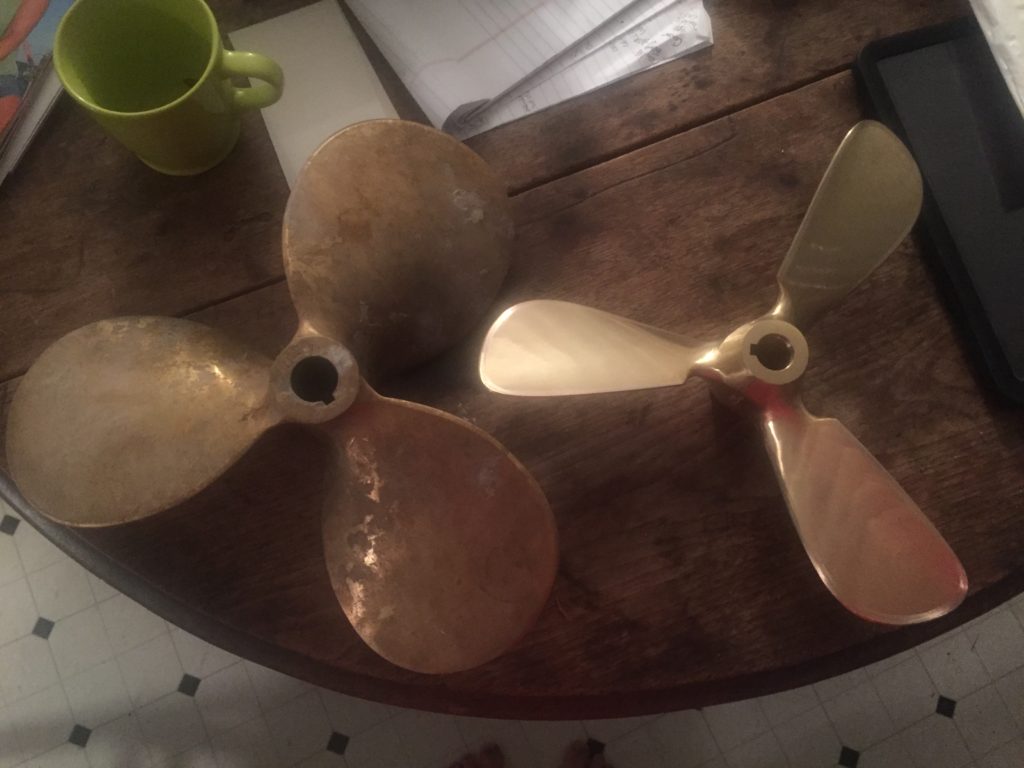 …But a super quick test of max RPMs gave us 5.7 knots. We won’t run the engine at max revs, but it was nice to know our boat might actually be capable of motoring at 6 knots if we ever needed it to.

Full props (hehehe) go to Jon, for shouldering the absolute brunt of this boat-load of work while also balancing his business and our summer fun… somehow we managed a five-week haulout without going broke, going mad, or giving up on Brio… and I think I’m getting downright mediocre at aligning engines!

That’s a success in my books 🙂