January put up such a good front — warm 40-50F days, barely a skiff* of snow on the ground, and easy living on the boat and visiting friends.

Starting with Portland: full of charming cobblestone alleyways, perfect for Tuesday date-night explorations… (*this is a “skiff” of snow, by the way, for anyone unfamiliar with the apparently Canadian term 😉 ) 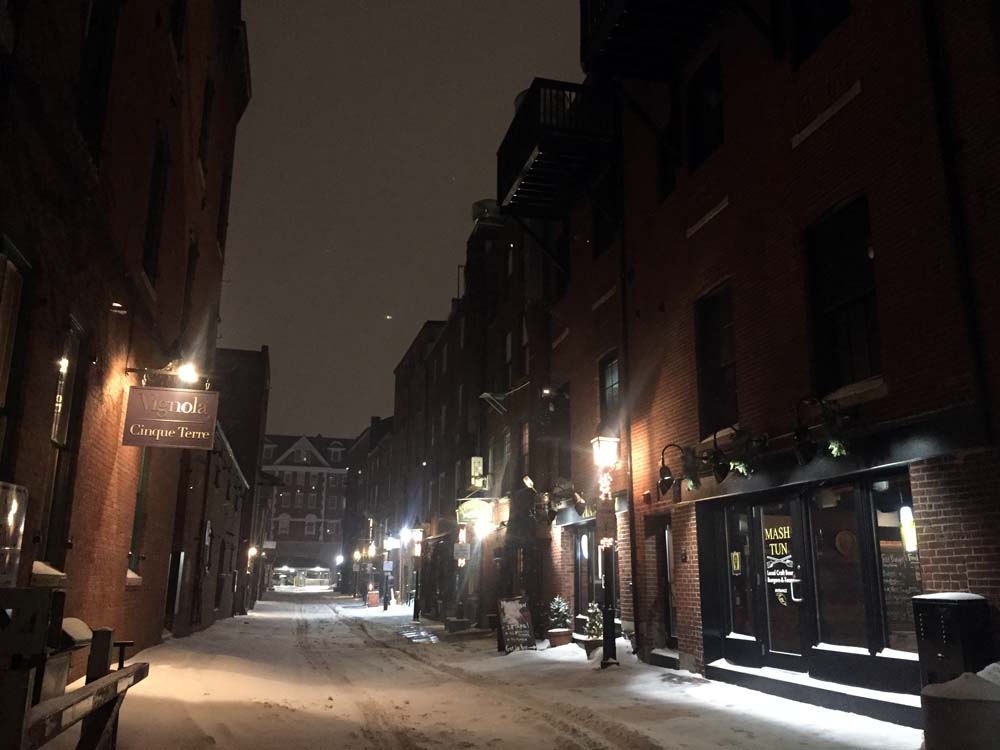 Continuing in Saratoga Springs: Where we met our friend’s handsome new addition to the family… the perfect “prop” in my #operationmakeJonwantbabies attempts 😉 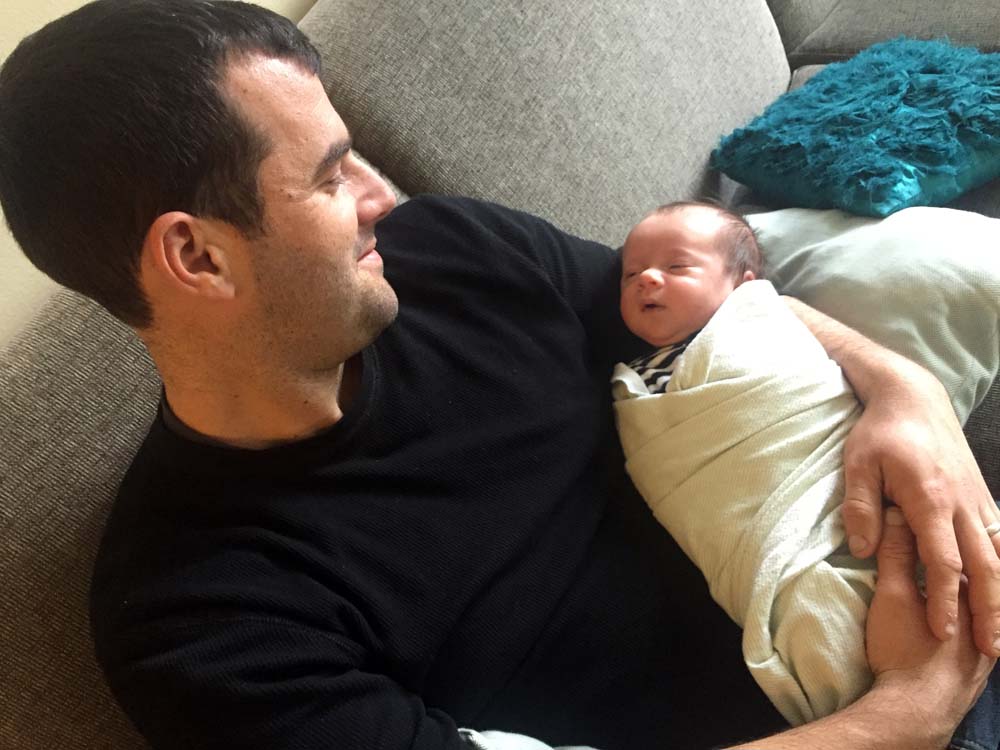 Saratoga Springs has these awesome “warming huts” that you can book for your own event, and they even provide the firewood to get the huts nice and toasty 🙂 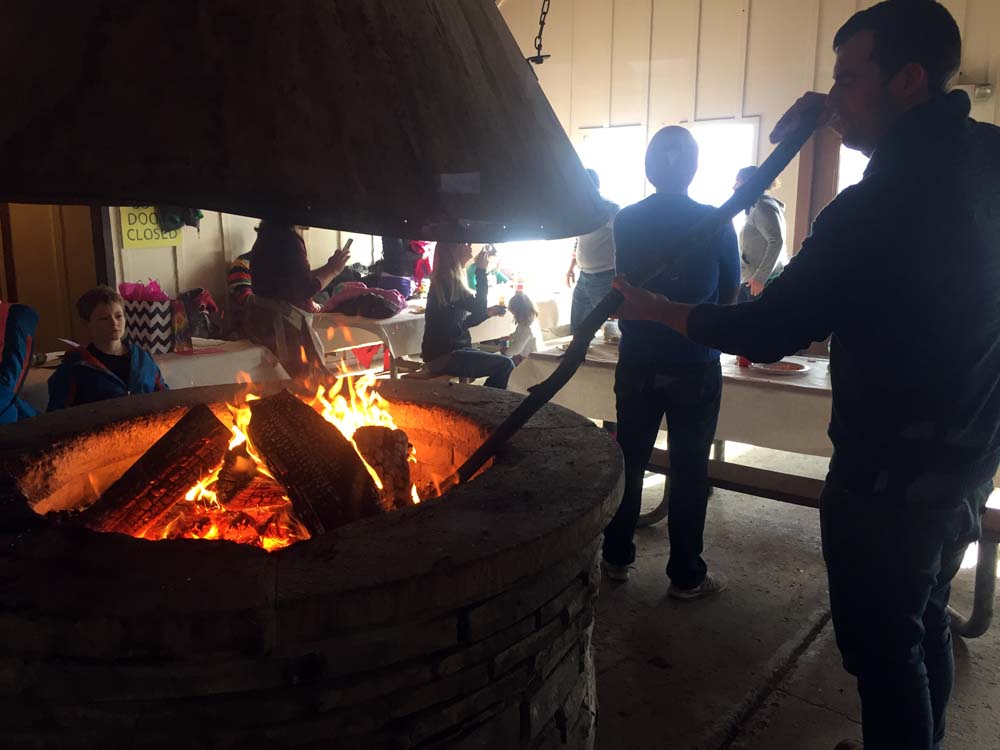 Cold temps mean flowers have to be in bud vases… 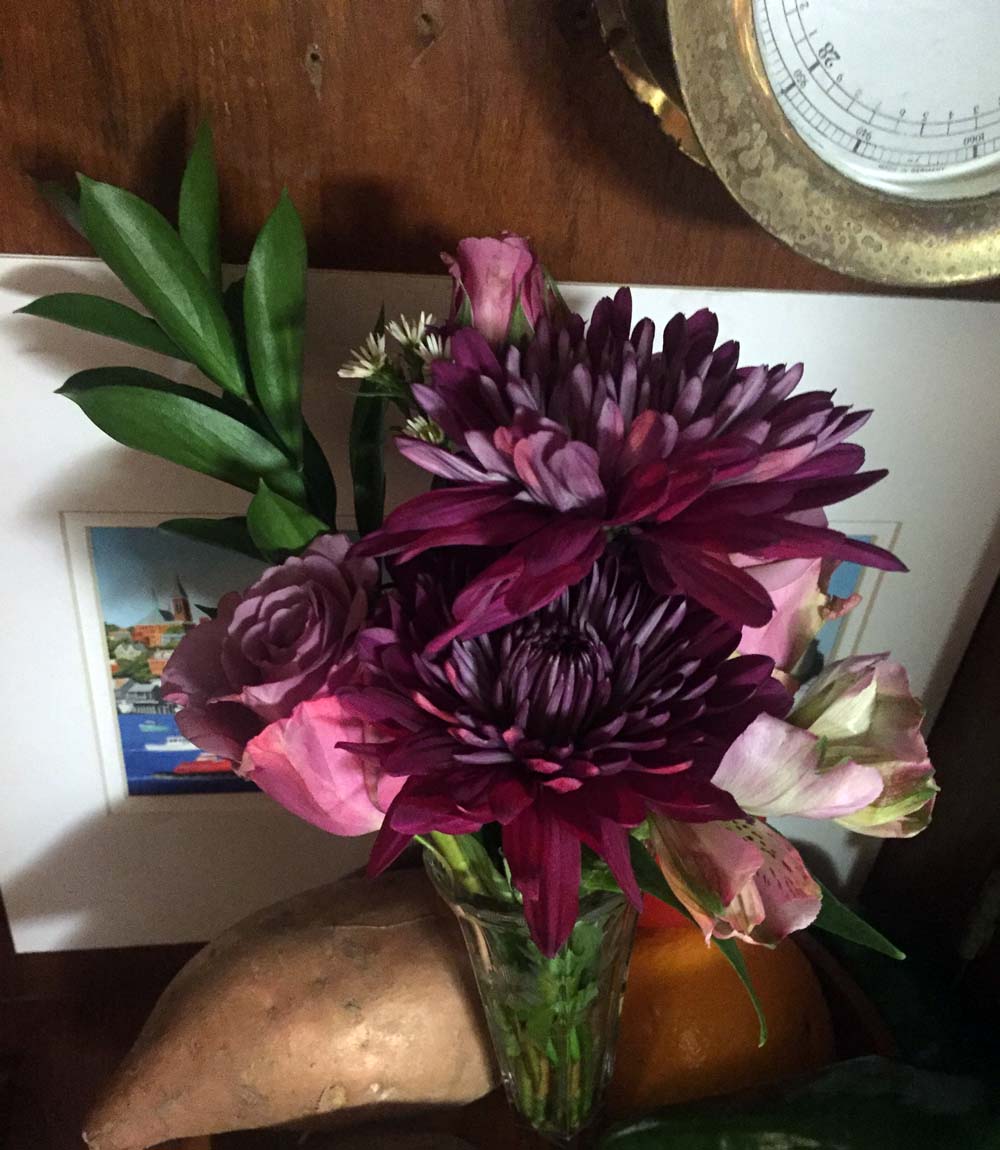 More time to pretend we’re fancy with our appies (and Jon’s beautiful handmade cutting board!)… 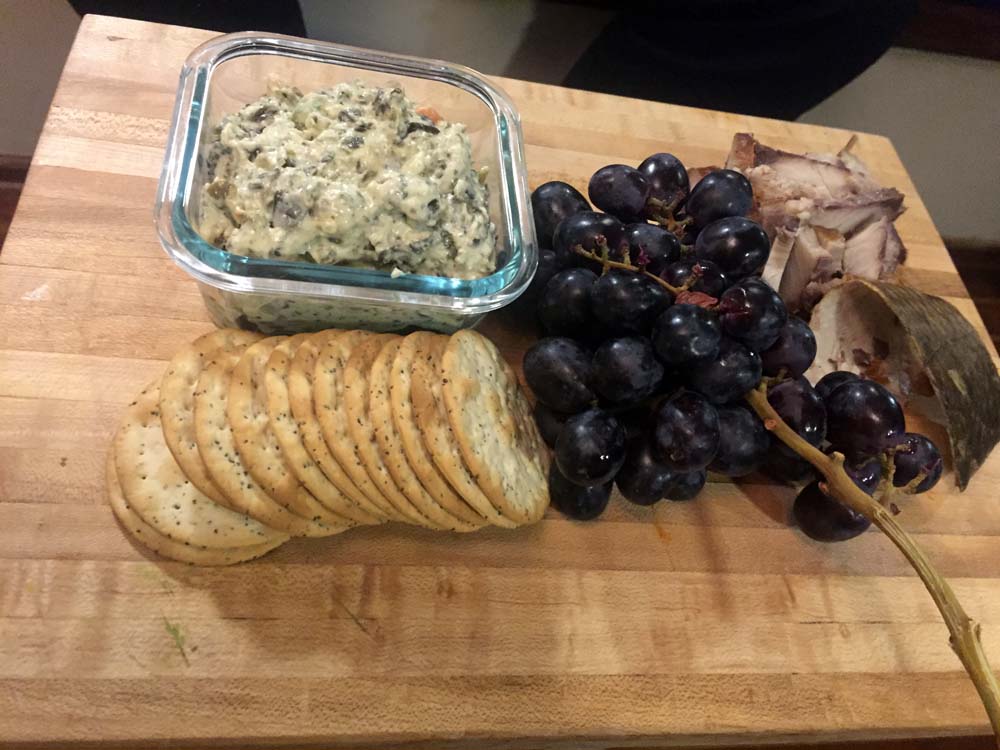 Breakfasts in the bubble… 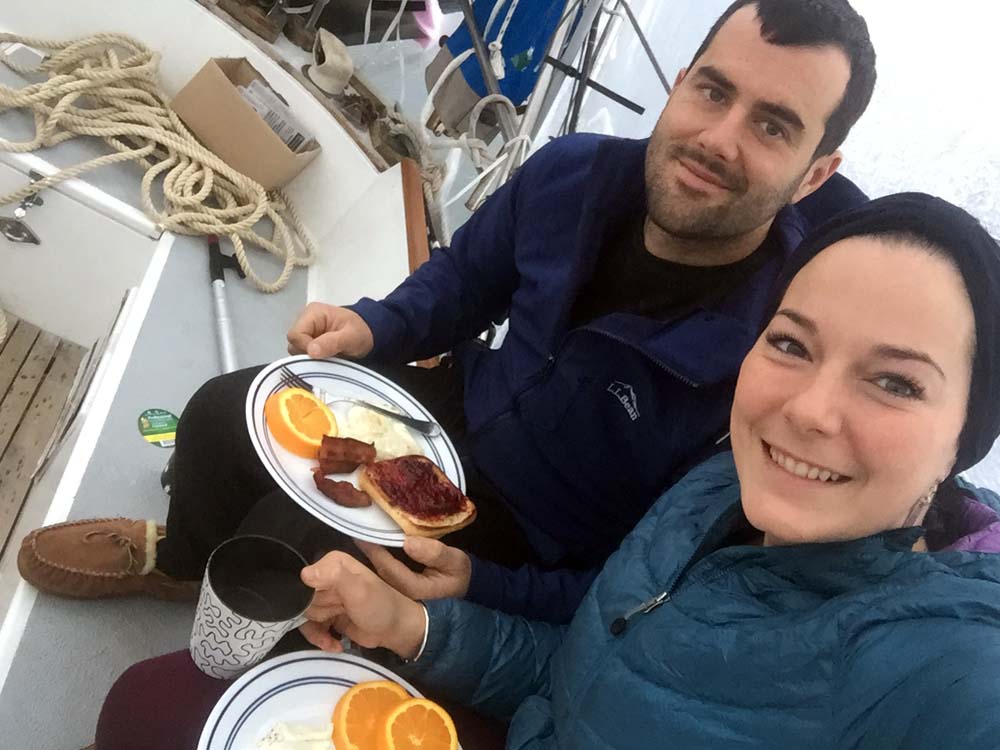 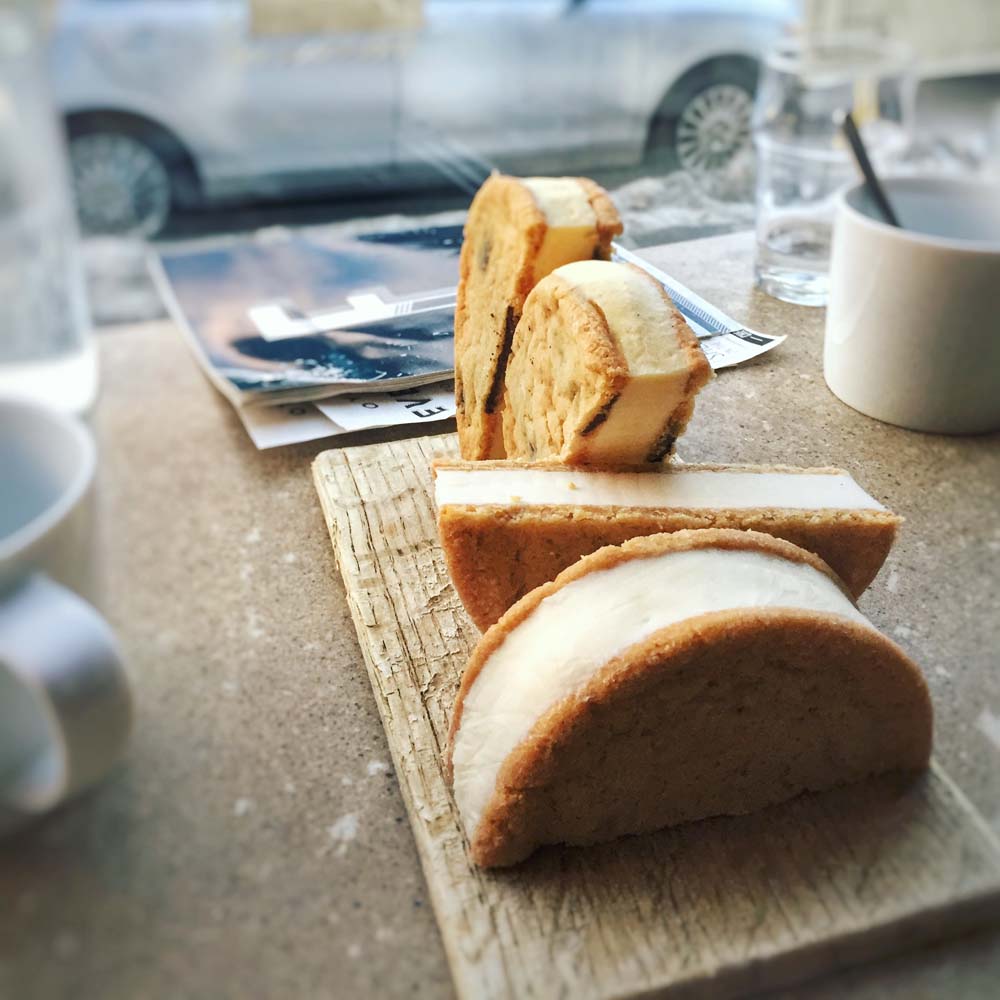 But then February showed up, and she’s been showing her true colors. 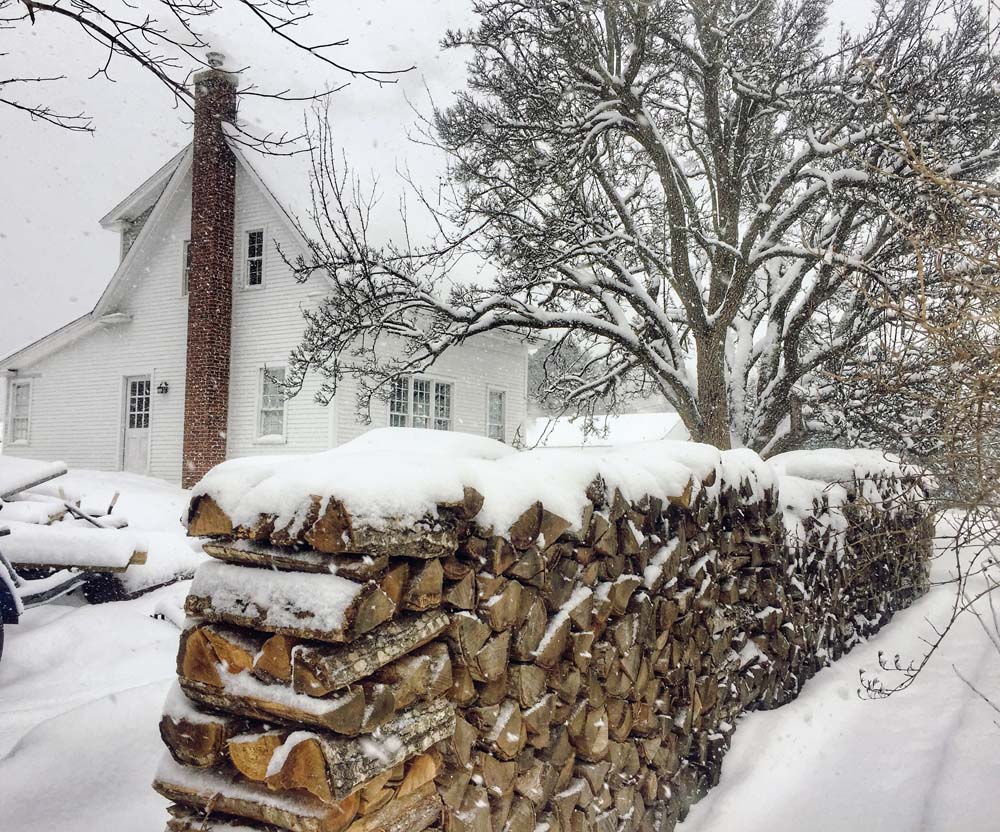 10″ of snow last week, 20″ yesterday, and coastal forecasts that include words like “hurricane-force gusts”. NOT my favorite forecast! 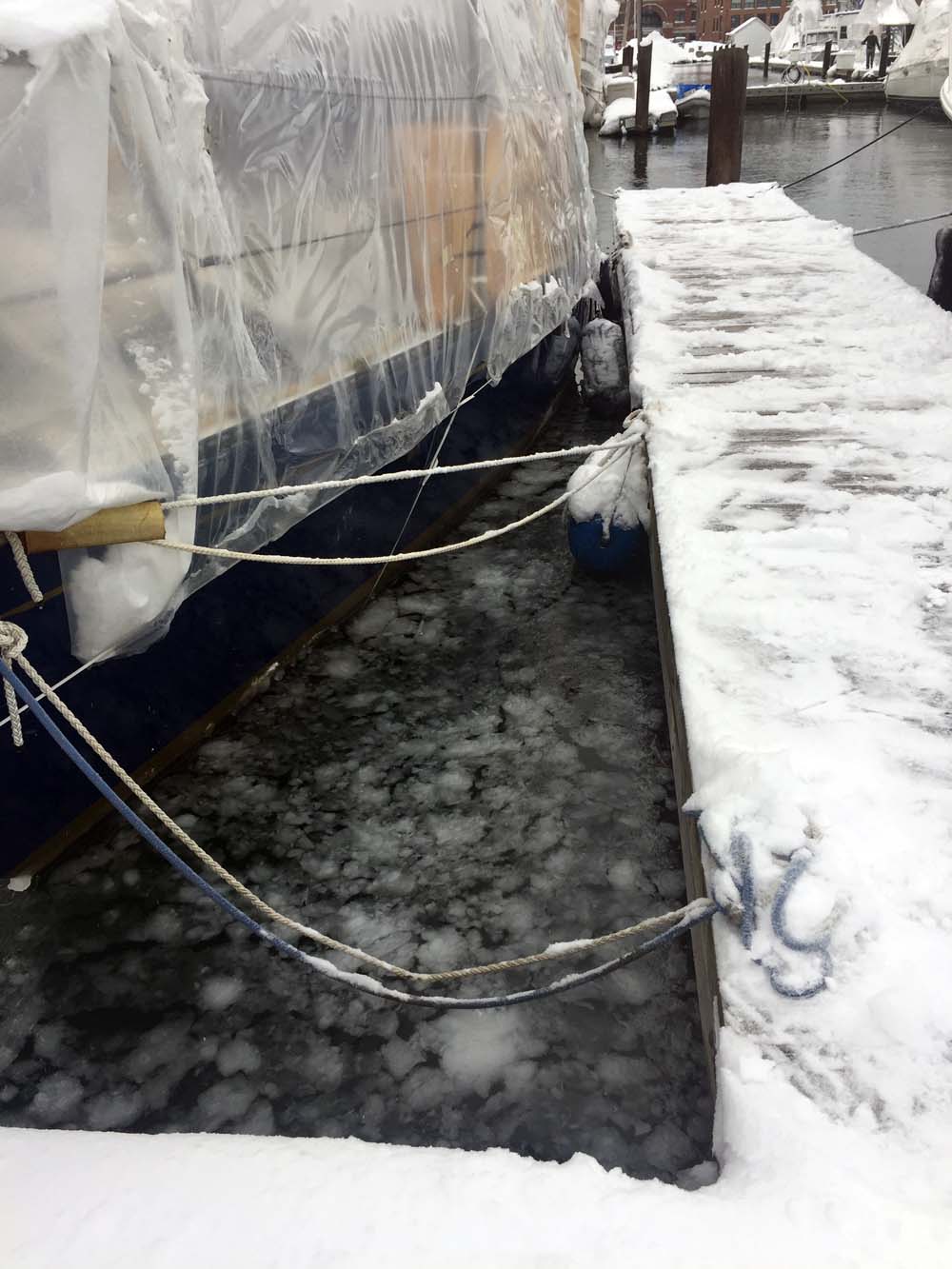 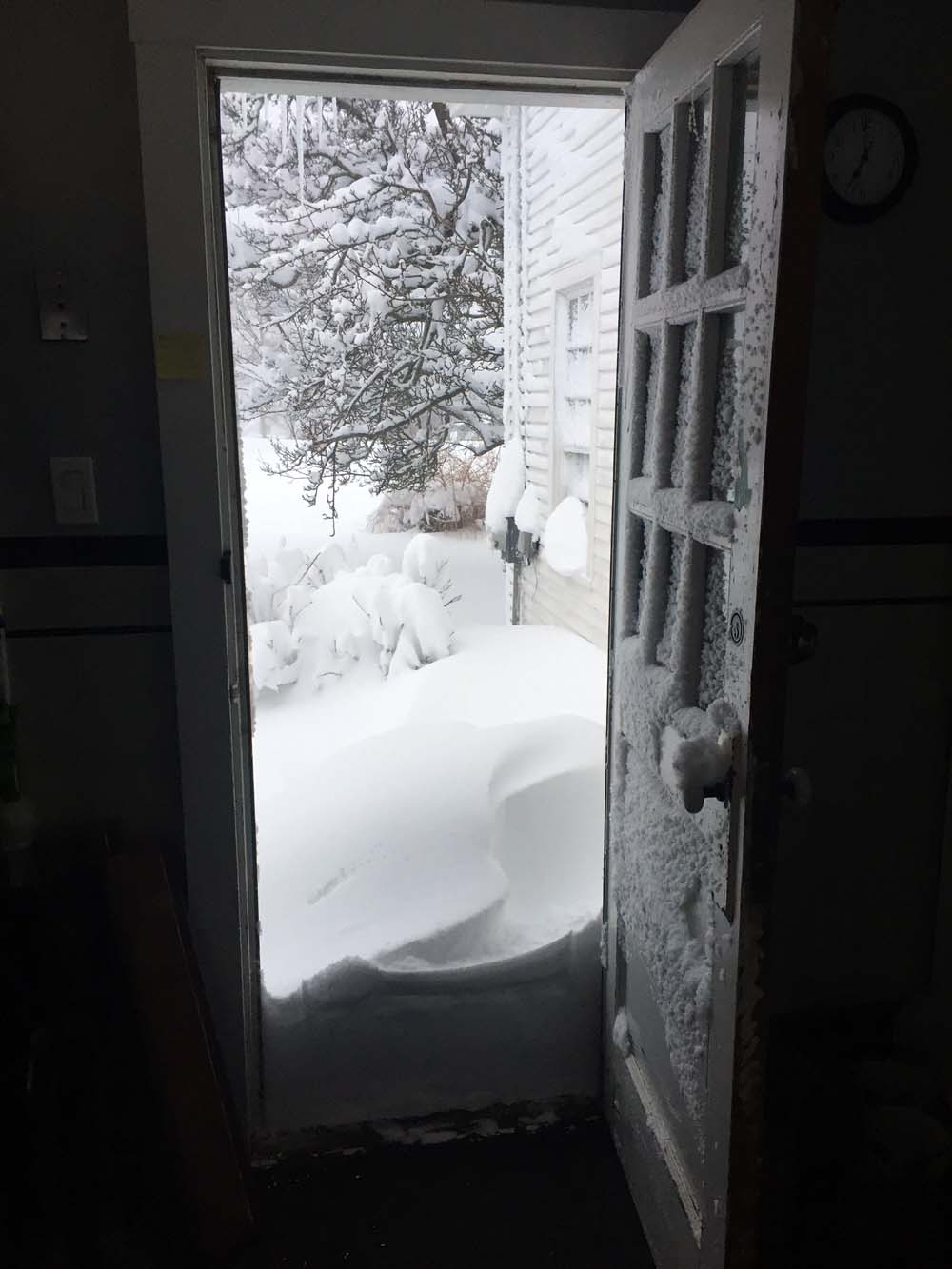 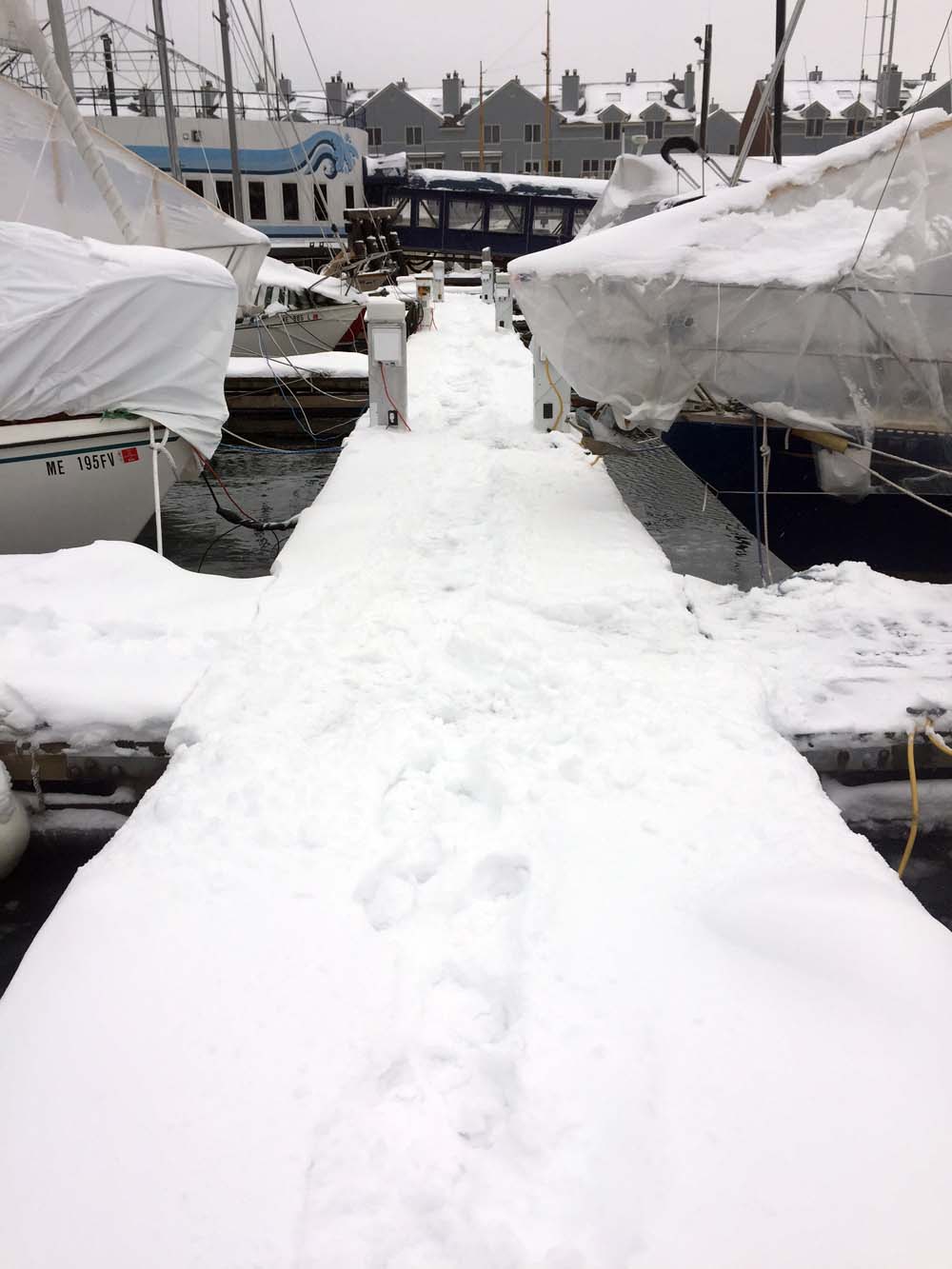 Thank goodness for mother-in-laws 🙂 Mine generously opens her heart and home to us on a regular basis, and welcomes us (and often our dirty laundry, sewing projects, and extra “stuff” that needs a home for the winter) without judgement. We’ve been camped out here for the last week, and it’s been AWESOME.

Unlimited hot water! Cable television! Queen-sized bed! A snow-blower to play with! Wood stoves to stoke! Gorgeous sunsets and even an OWL who came to visit! 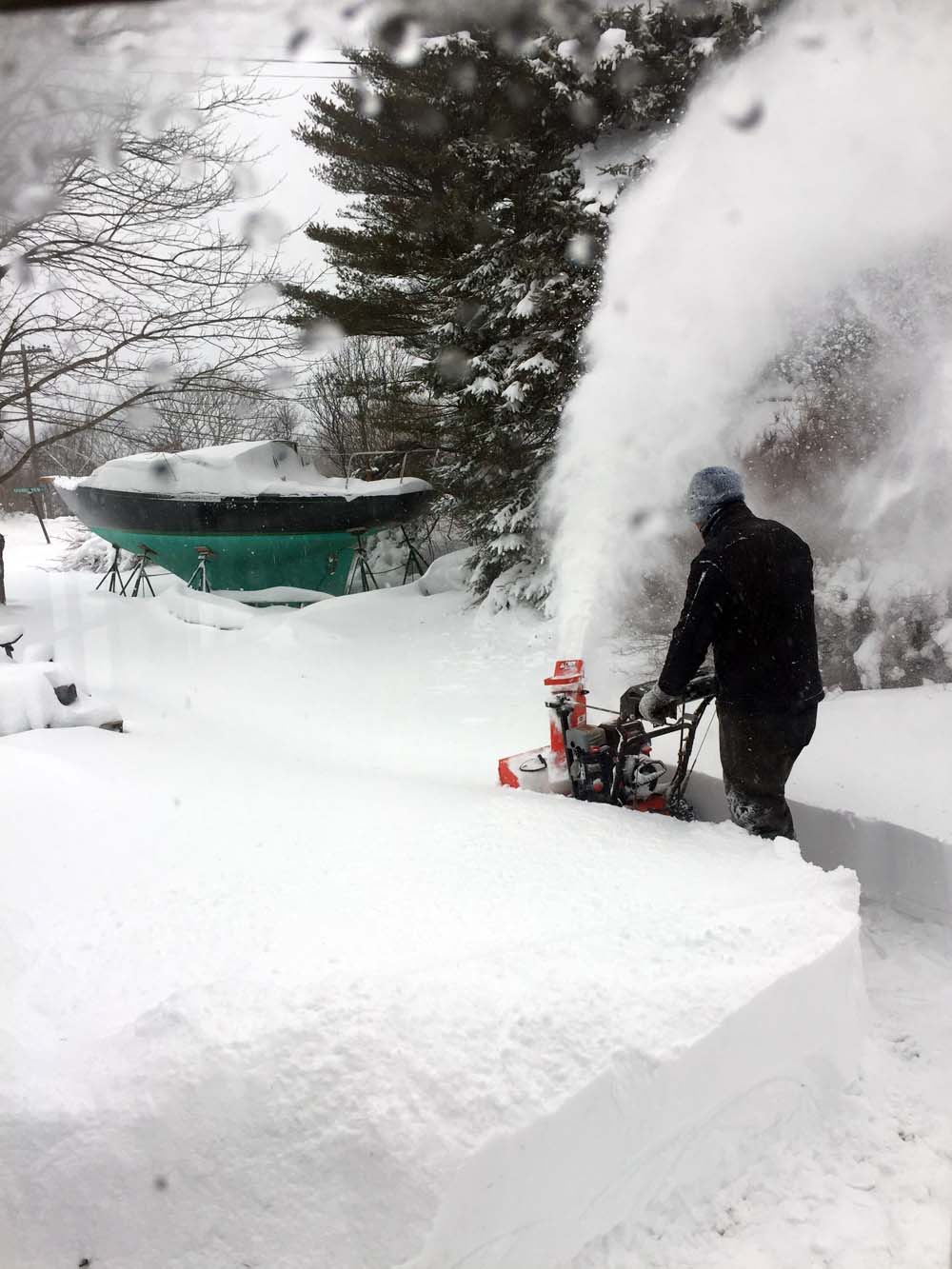 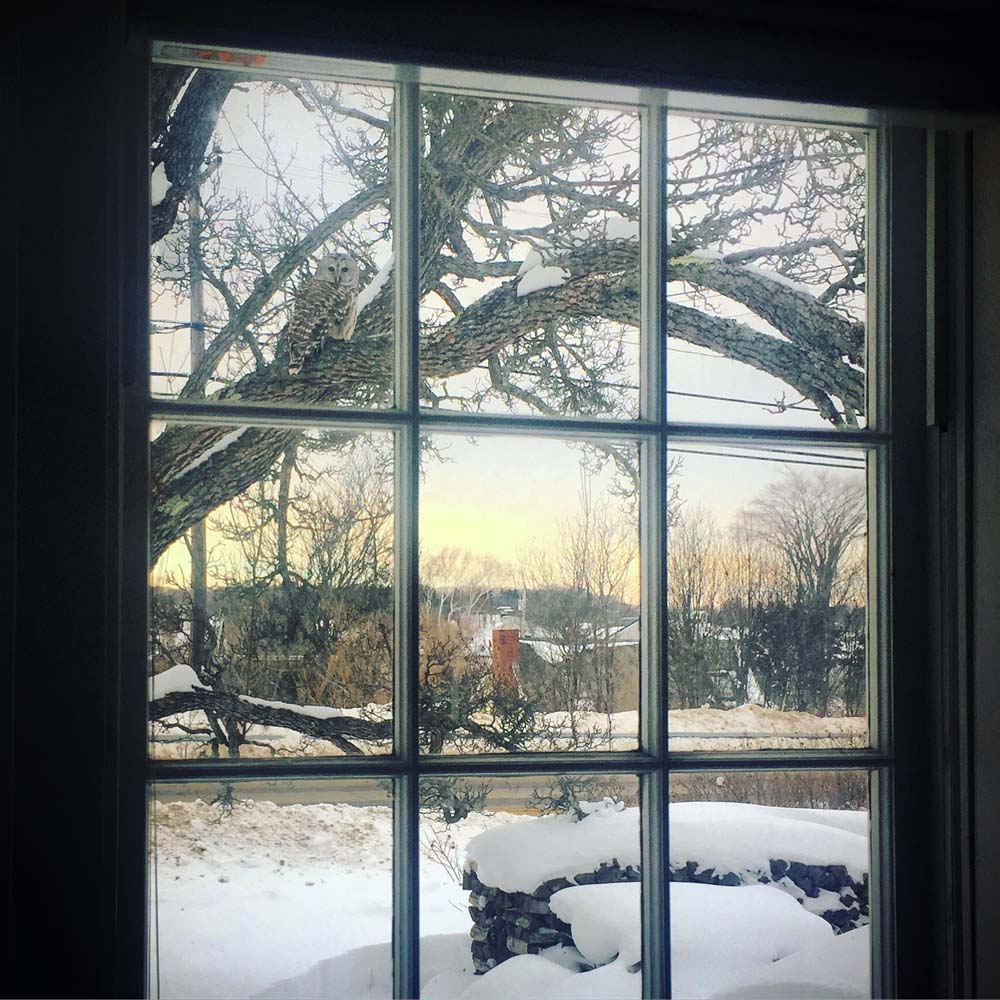 It’s been so nice to have quiet time and space to work on some bigger projects.

The new Beta 25 was dropped off — literally. Through some bizarre series of miscommunications, they delivered the engine to the middle of the marina parking lot and drove off, without any notifications or calls — Jon showed up just as some contractors/strangers were considering whether our new engine might be their new engine, and were debating whether to load it up and drive it off or not!!! Some strong words and discussions later, Jon had our Beta safely loaded up in his truck and away from prying eyes. 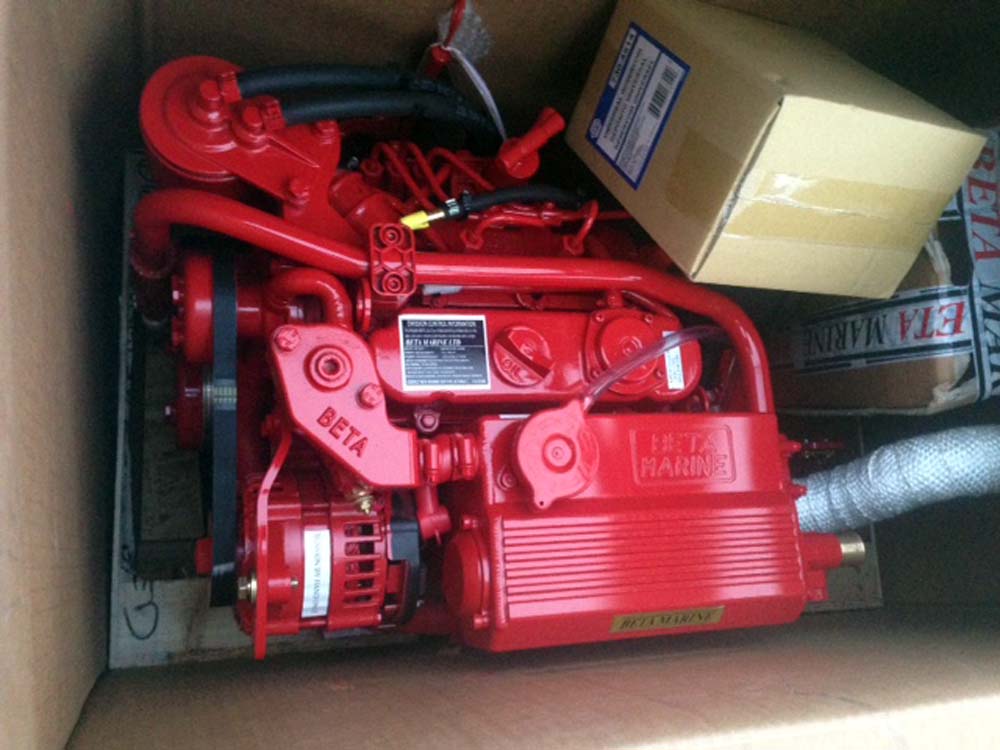 This might be a good time to point out that this is the MOST MONEY WE HAVE SPENT since buying the boat (it ended up being $10k) so the prospect of our brand new engine just *poofing* into disappearance left the two of us breathless for quite a while.

We have to lower the engine stringers about 2″ for the new Beta, so that’s the current engine repowering project…

My projects have been… cushier!

After 6 years of sleeping on our vberth foam, it was time for a new custom cut mattress. Enter foambymail.com << greatest foam supplier ever! Unfortunately the bevel was exactly upside down (it’s hard to describe a bevel!) so it was Leah’s pro foam-slicing skills to the rescue!

A little slicing, dicing & gluing later, and the new mattress is AMAZING — our backs are very thankful! 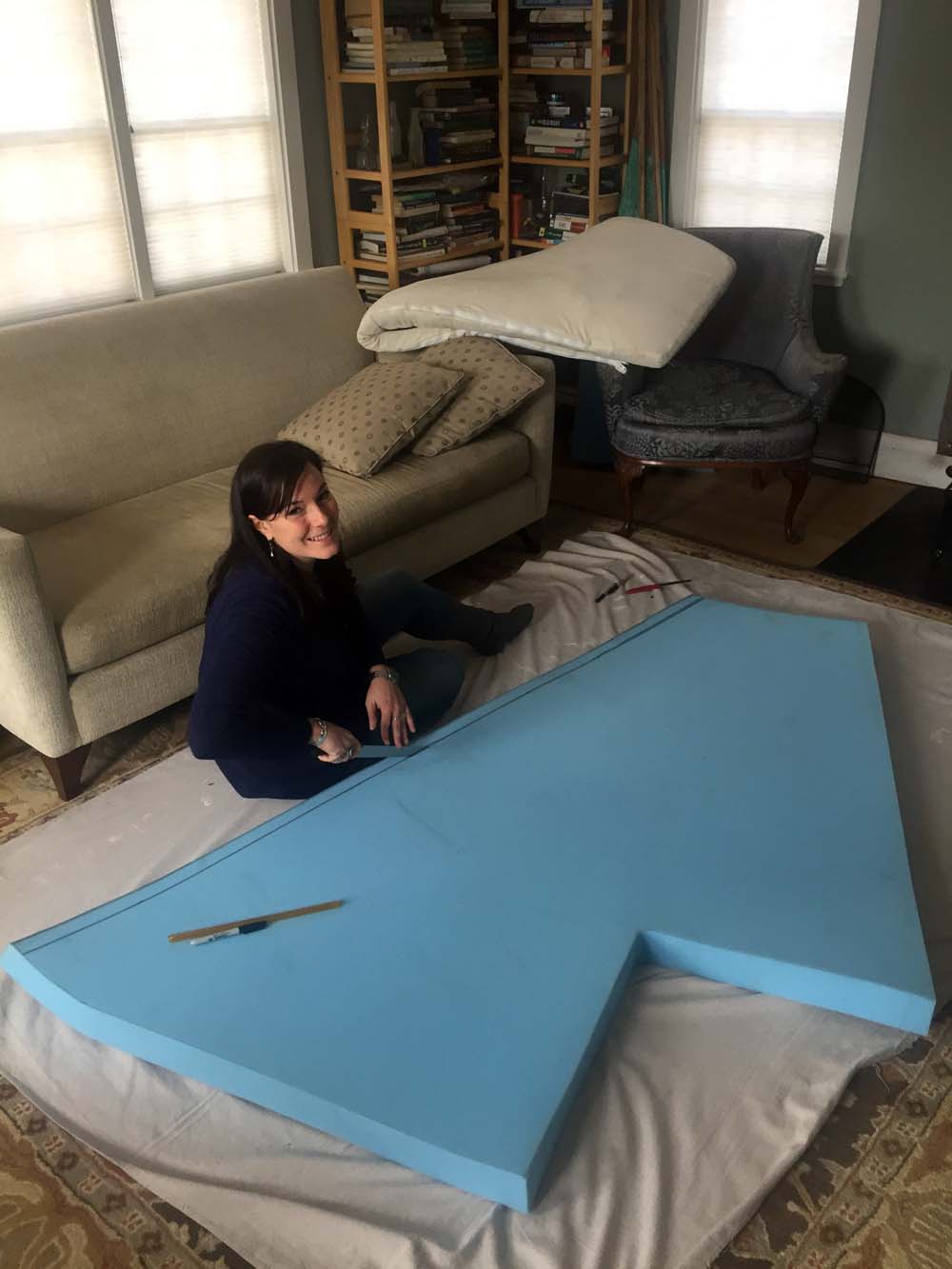 This meant I could use the original vberth foam to build a quarterberth cushion — low profile, heavy-duty sunbrella cover, hopefully comfy enough for any moms or occasional visitors! 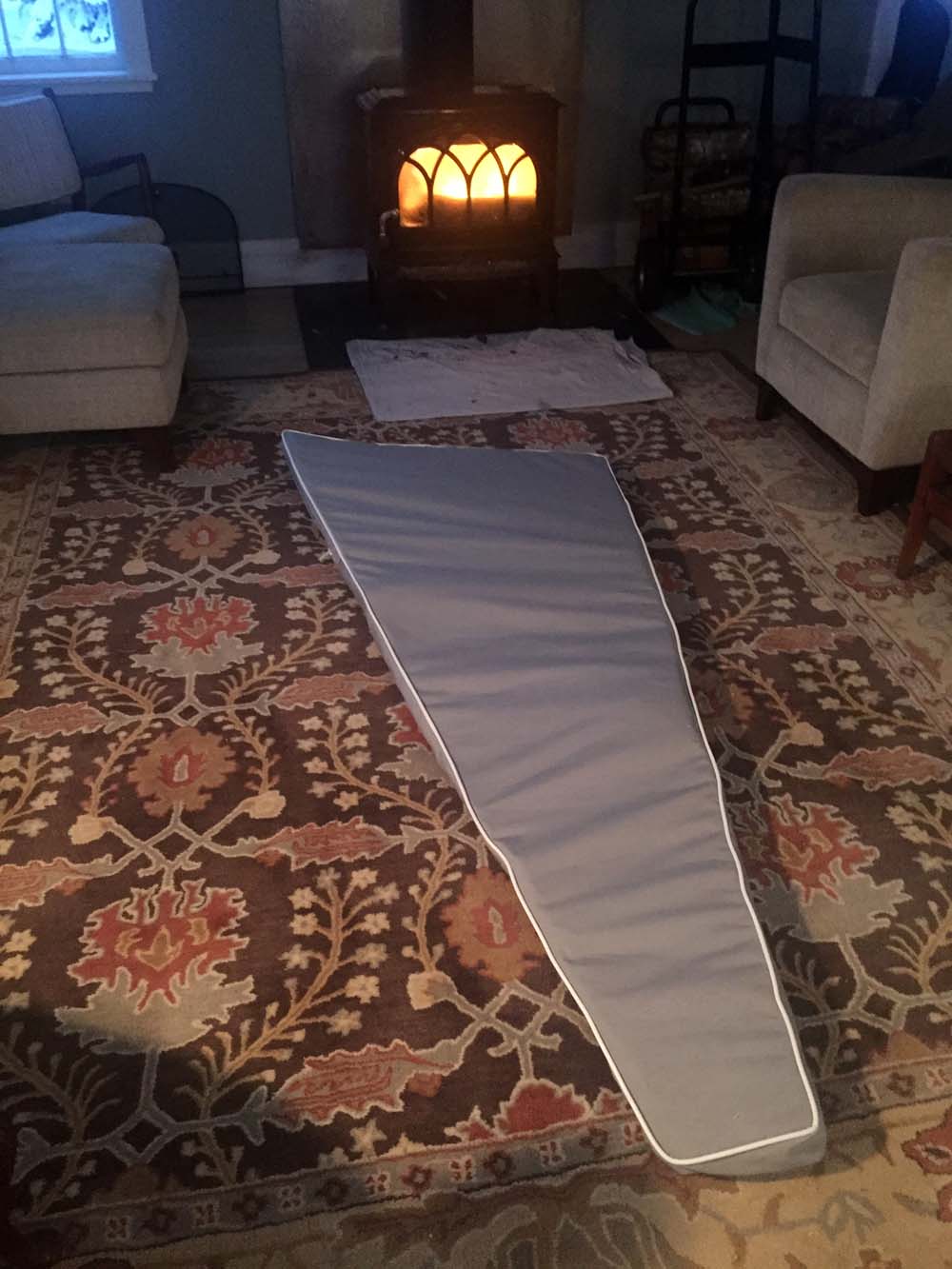 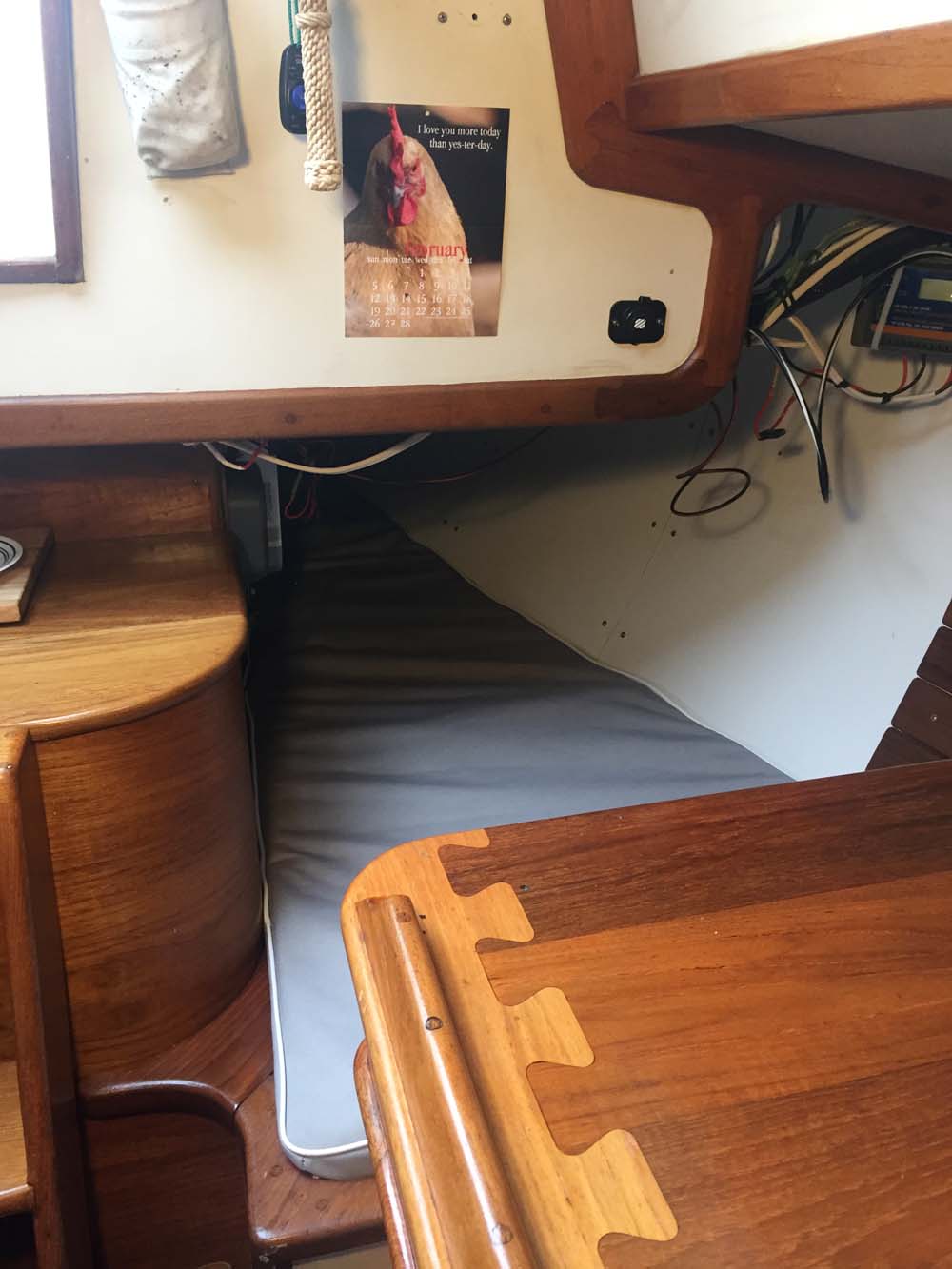 I’m learning to love this quiet season of productivity, and Brio is definitely appreciating the extra attention.

And that’s it from me!