They say there are two camps of sailors — those who have run aground, and those who just haven’t run aground yet.

To make this Valentines especially memorable, I moved us into that second category not once but TWICE today. Just to make sure we were really well and truly “those who have now run their boat aground”, you know?

The first time was fairly innocuous — it had been a tight docking squeeze to get out of Oriental and I was feeling prematurely amped up over making it unscathed. That pent up energy translated into me missing the turn for the channel and instead ending up in a super skinny 6’ deep channel to nowhere…

When I realized my mistake, I tried to back up and out the channel — but the waves were choppy and the markers were tight, so I got nervous and started an Austin-Powers-style manoeuver to try to turn around in the channel instead.

Since it was 6’ deep in the channel, it was… definitely less outside of the channel 😛

Thankfully I only churned a little mud, and we made it back into the main channel with only a few years shaved off our life-expectancy.

Back in business, the current Gods were on our side, and we surfed through Morehead City at 7-8 knots.

As I pulled us into the anchorage, I told Jon I’d just nose up to the shoal to see how quickly the depth came up.

With a nice sickening thump to confirm that, yes, I definitely had found that shoal.

Peppa Pig was called in (our default bad-parenting-get-our-of-jail-free card when we absolutely need the little one to just be happy on his own inside), and Jon started to launch the dinghy.

Tide? High and dropping, of course, with the next high not until midnight.

As Jon worked to get the dinghy and an anchor ledge set up, I realized that we were rocking just a little bit when we walked back and forth.

“Should we give it one more shot with the boom pushed out and our weight on one side?” I asked Jon. “Can’t hurt,” was the answer.

We pushed the boom as far out to starboard as we could, I popped her in reverse and we leaned our body weight out as far as we could. Sloooooooowly, to the tune of “Bing Bong Boom”, she came around and off the shoal, and I was able to motor back into deeper water.

Tucked in at anchor now, with an ice cream and glass of wine down, I’m quite confident we’ll remember this Valentines!!!

Hoping for a less memorable evening,

A few snapshots from the journey to the ICW…

I used to be braver. Six years ago I wouldn’t have thought twice about a little daysail to a new anchorage. I wouldn’t have checked the weather 27 times or renewed SeaTow or double-checked our EPIRB and flares. I wouldn’t have agreed to push a departure day back week after week – I would have demanded we bite the bullet and just go already! 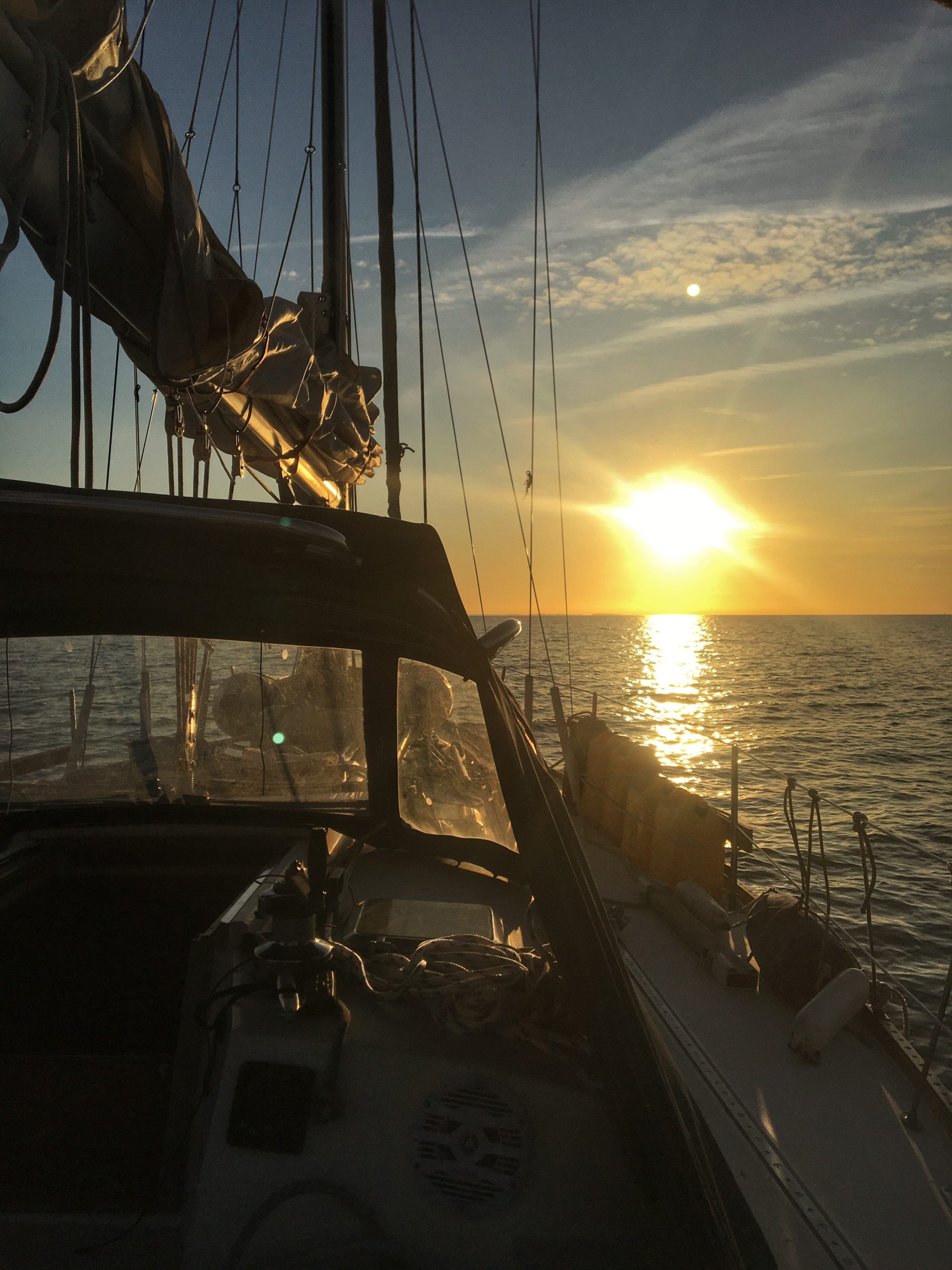 I don’t know if it’s the kiddo or the new-to-us-boat or January weather or long period of not sailing or just the combination of all those things, but I suddenly feel like I’m new to this all over again. I’ve been so excited to leave, to get back to the “nomadic” part of our life, but with a heavy dose of needing to psych myself up for the actual leaving part, faking brave when it wasn’t coming naturally.

The upside of this is that it’s also brought back fresh eyes to what’s around me — to see this life that I really do love to my absolute core.

Is there anything better than sunrise at sea?

The sun rising, eyes smiling, water sparkling, a token dolphin because the scene demands it.

The only thing that could make it more magical would be if Zephyr was happily watching the waves with me, but actually he’s inside watching Peppa Pig 😆 A concession we gratefully make to buy the minutes we need to untie our spider web of lines (“how long do you think some of these lines have been tied here?”) and slowly back Brio II our of her slip, pausing to take a picture for what I hope might be the last time but won’t say out loud just in case I jinx it only to realize later that Jon took the exact same picture, standing on the bow and looking back while hoping we were moving forward.

Today was magical and tonight we’re at anchor for the very first time and there’s a gentle rain softly pattering on the deck and it’s interrupted occasionally by Zephyr shouting “no horsey!” (his interpretation of “no-way-jose” 😂) while I lie in the aft cabin in front of the heater duct, full of gratitude for this very perfect day.

My measure of days is “will we want to tell Zephyr stories about today when he grows up?”

I’m quite sure we’ll tell Zephyr about today.
“And after you’d lived at Herrington Harbour longer than anywhere else in your little life (a true statement that horrified Jon) we finally broke the spell and fulfilled mommy’s goal to leave in January, making a break for Solomon’s Island on January 31st (cuz nothing motivates a lady like a deadline) under a bright beautiful sky and flat seas and lots of nerves about what unforeseen things would break first and by some miracle we arrived without a hiccup and you slept through us dropping the anchor and revving the engine (or at least you complained quietly enough that we ignored you until you fell back asleep) and then because you were with us we mustered energy we didn’t have to launch the dinghy and go for a toot around the anchorage, ending at the Marine Center so you could visit the fishies and otters before we came home to our warm toasty boat and had dinner afloat listening to a soft rain before we all collapsed into bed, grateful for a warm bunk and six pillows each because you and your daddy are both pillow princes”